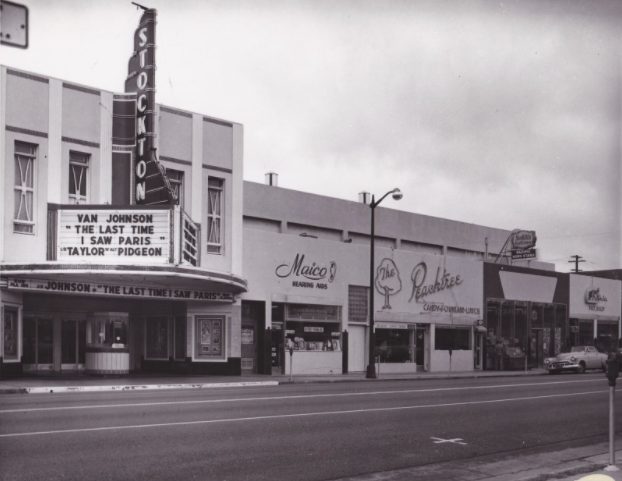 Since its creation in 1945, this iconic building on the Miracle Mile on 1825 Pacific Avenue has been called many names. The Stockton Theatre. The Stockton Royal. The Empire Theatre. The Promenade Building. Most recently, it was the primary location of the Empresso Coffeehouse. And for nearly 90 years, this hub of community and culture served as the setting for generations of people and their memories.

Public space is essential to the health of a city. That became clear when Alyssa Leiva spoke at the demonstration to preserve whatever we could of the beloved Empire Theatre, about how the coffeehouse was an essential place to study in order to juggle graduating with multiple jobs. It was obvious when streams of comments flooded the Stockton History and Memories of Stockton pages, with loving tributes and moments that space held for generations of people.

Thousands of Stocktonians enjoyed memorable experiences in the Empire. Many experienced their first movie magic there.

“I remember going here as a teen to check out the guys,” posted Priscilla Aragon.

“The experiences, memories and friendships we made there were priceless and beyond the walls,” added Arlene Galindo.

Ten-cent movies. First dates. Casual hangouts. Being introduced to Star Wars for the first time. Drawing and drinking coffee together. Imagining all of the roles this place played in people’s lives made my heart even heavier when I heard about the fire. 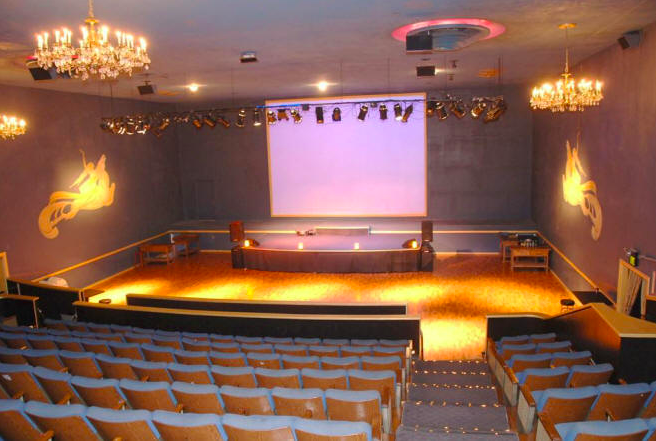 The interior of the amphitheatre in the Stockton Royal’s heyday. Photo sourced by Floyd Perry Jr.

This once magnificent gem of a building first opened its doors on June 16th, 1945. It was later renamed the Stockton Royal in 1976, with three smaller auditoriums being added onto the building. The former movie theater was once arguably Stockton’s best redevelopment project. It was a model of successful preservation and repurposing, housing nine businesses, including a popular coffee house, a bar, and eateries. All infused life into the Miracle Mile commercial district.

The nine businesses within its walls created a community hive. After hanging out at Empresso Coffeehouse for a couple hours, many folks ambled out onto the Miracle Mile to restaurants and bars. The Empire perfectly complemented the Mile’s walkable urban village.

“It was alive and vibrant, the center of central Stockton,” wrote Wendi Maxwell.

Historically, this place was home to many important moments, including United Farm Workers and Agricultural Workers Organizing Committee meetings and Black Panther protests. It was a venue for bands throughout the years including Fats Domino, Pavement, Green Day and others, according to local historian Phillip Merlo. More recently, it provided space for student and community organizations to meet and build. Even water rights advocacy group Restore the Delta made its beginnings here. When Empresso Coffeehouse was located in the theater, it was home to weekly poetry nights, open mic nights and art shows for local creatives. People of all types flocked day and night to a public space that was cross-cultural, intergenerational, safe, and equal parts quiet and social.

On a more personal note, it formed the web and relational fabric that inspired Placeholder to exist in the first place- with our community finding ourselves and each other often at the coffeehouse.

The aftermath of the amphitheatre, in the most recent fire to grace the former Empire Theatre.

On May 14th, the Empire Theatre caught ablaze in a five-alarm fire- taking with it the ancient amphitheater in the backside of the space that used to hold concerts, panels, performances and film screenings. The only story happening there that fateful Friday morning were thick and smoky tendrils drifting towards the sky, the crackling flames erasing more than the walls.

It wasn’t the first time this beloved theater found tragedy.

Spooked by Oakland’s Ghost Ship Fire, the city took property owner Christopher “Kit” Bennitt to court, saying it was the only way to force him to play by fire safety rules he long ignored. As part of the action, the city evicted the nine businesses and a resident with no warning in 2017.

Bennitt says he spent a small fortune on safety improvements, but the city was impossible to satisfy. He has counter-sued. Both suits were filed in 2017, but they have barely gotten rolling. A hearing on the city’s motion for summary judgement is scheduled for August 27.

At least two of Bennitt’s business tenants sued him as well. The status of those suits is unknown.

The he-said/she-said counter-claims and lack of clarity to be gained from a court trial means responsibility for the Empire Theatre fiasco remains murky. Was Kit Bennitt arrogant in blowing off fire safety regulations? Was the City of Stockton a business-unfriendly bureaucracy? Perhaps both?

City officials blame Bennitt not only for failing to secure the building from destructive squatters but for leaving it shuttered when it could have been fixed and reopened by now.

“It’s depressing what he’s doing to other business owners on the Mile,” said District 4 Council member Susan Lenz. “He is not a good property owner.”

To be fair to Bennitt, the City of Stockton has been unable to secure many of its properties, too. As to why Bennitt has not rebuilt and reopened, that’s anybody’s guess.

Calls to Bennitt’s attorney were not returned. 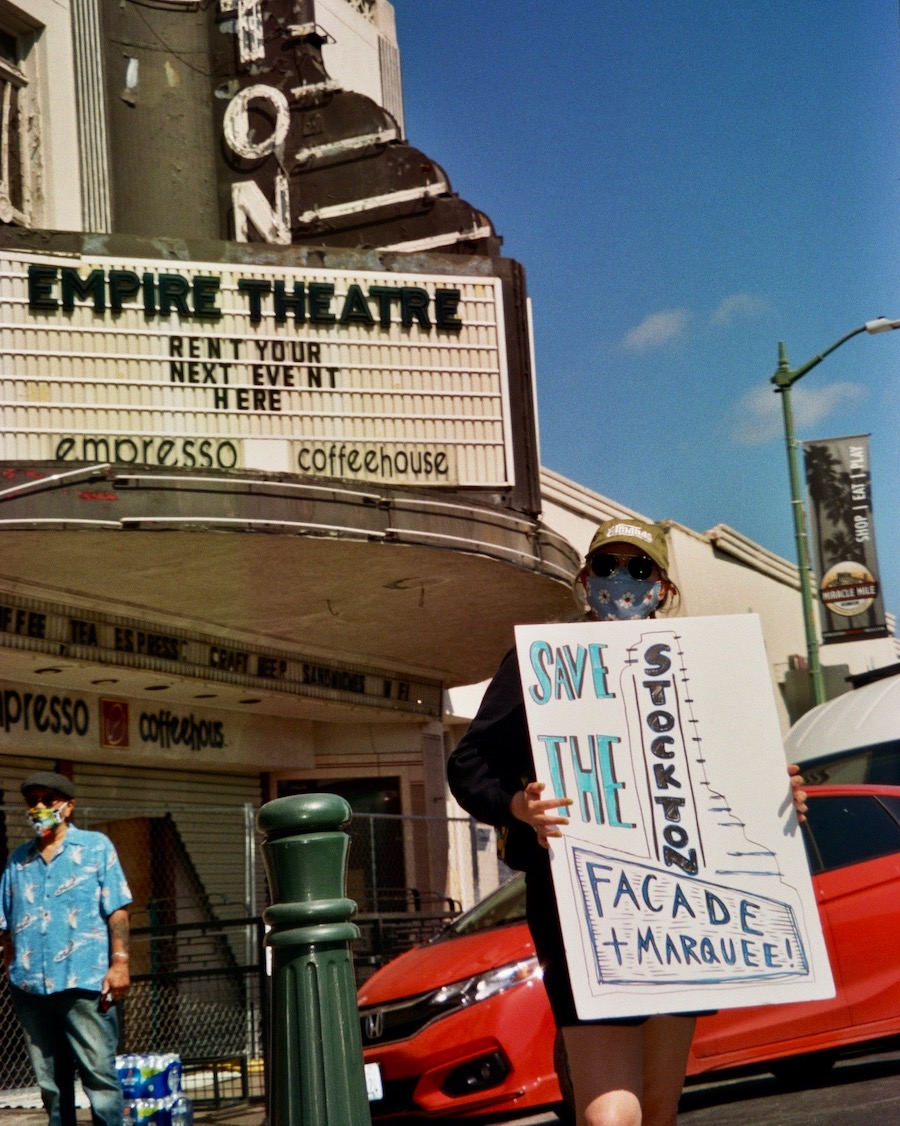 Local musician Cheyenne Wells protesting to save the façade.

There’s a widespread hope in the community that the façade of the beloved building, including a 35-foot, Art Deco neon sign tower, can be preserved.

Wes Swanson, the longtime head of the Cultural Heritage Board and still a passionate preservationist, said the façade should be preserved.

“The building was beloved on many levels for a long time, and what else do you want from a historic building?” Swanson asked.

The building is not a total loss, Swanson pointed out.

“These buildings are essentially documents,” Swanson said. “You’ve burned half the contents of the last remaining Gutenberg Bible, so you throw the rest away? No, you preserve what remains.”

It would take two cranes and cost around $5,000 to take down the Stockton neon sign, then another $30,000 or so to restore it, said Garrett Daniells, the Vice President of C.R. Glow sign company.

Daniells is willing to volunteer to help restore the sign. When his family’s company C.R. Glow was commissioned to restore the neon tower in the early 2000’s, it was Daniells who helped fish wire into the old sign as a little kid. For him, it’s both a sentimental and collective effort. Many community members would contribute toward that effort. But that is up to Bennitt, who for now is not responding. Perhaps, like the Empire Theatre building, he is burned out. 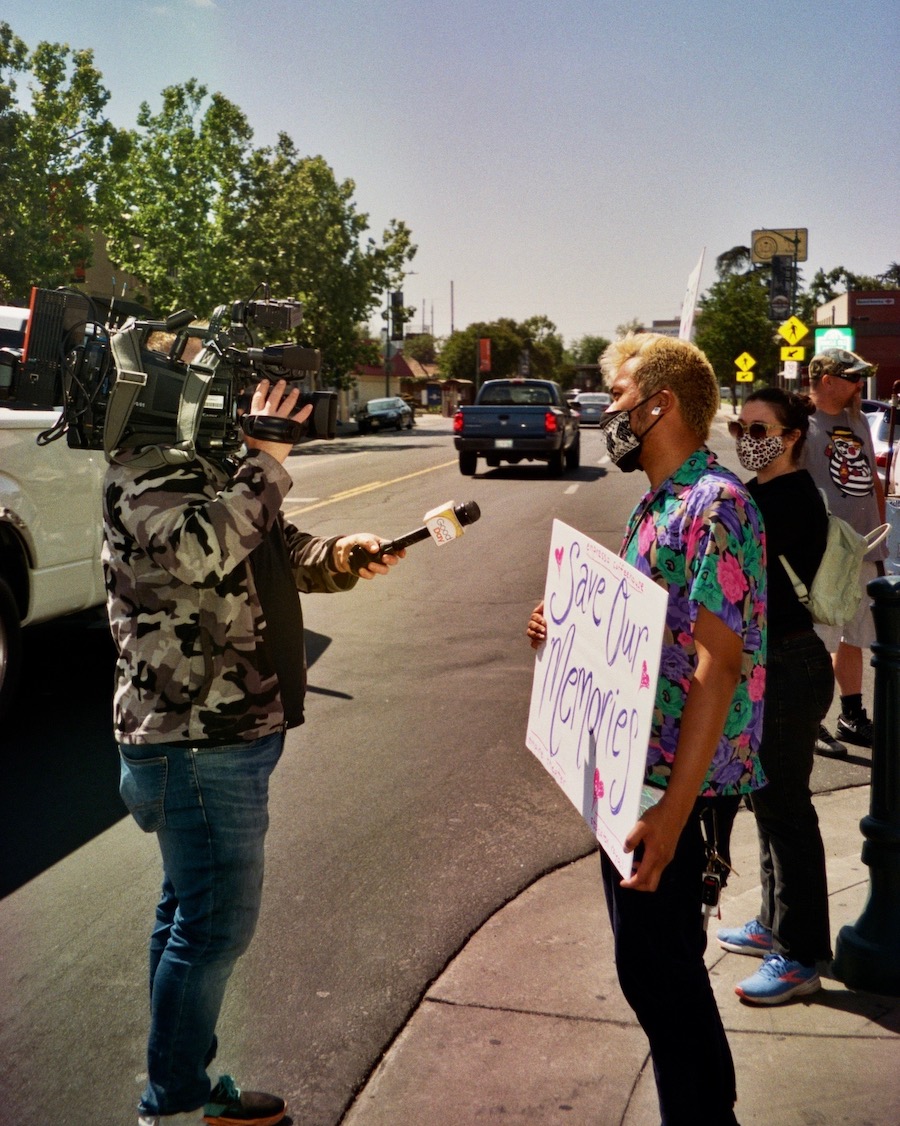 Placeholder contributor Orion Camero being interviewed by CBS13 News while protesting to preserve the iconic facade of the theater.

On May 17th, a group of people gathered as a movement of public support to preserve the sign. While it is clear that the theatre may not be fully salvageable, it is the vision and values behind this cultural space that is activating the community to come together. The Empire Theatre and how it was held represents local business, cultural expression, and historical preservation.

Across the street during the action, construction was buzzing to build another Starbucks- an irony that hits hard for our town, drained of its uniqueness by the encroaching development of big business and chain stores. While some may think our cause to protect the facade and marquee just chalks up just to nostalgia, our aim and purpose goes deeper than aesthetics.

The bigger lesson to learn here is how this situation speaks to how our city plans for its future, and honors its past. 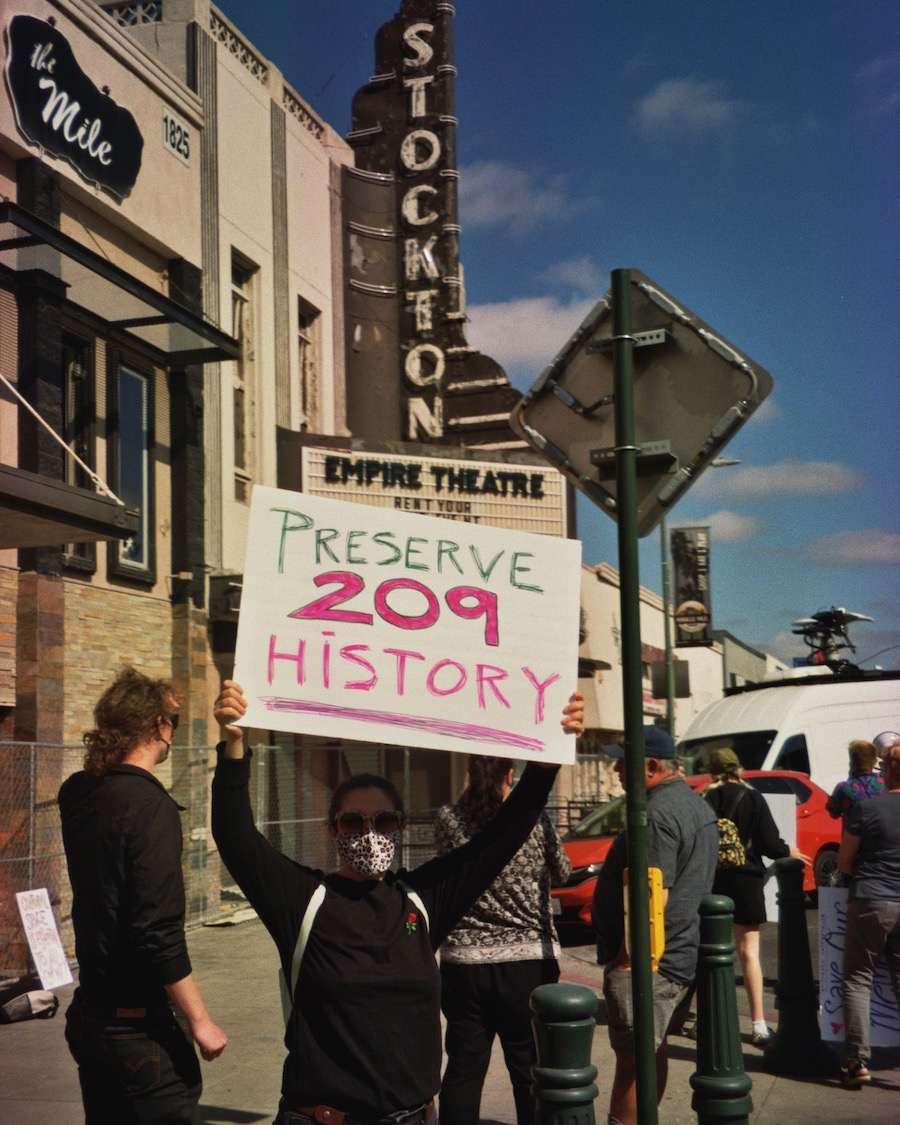 Local community member Natalie Abanavas protesting to save the façade.

Preserving part of this historic building is a metaphorical step towards a larger vision. Saving it would go a long way towards signaling three critical values we want to uplift for Stockton’s future:

The memories of the people of this city matter.

This city deserves and is worth so much more than copy-paste strip malls and big box stores.

TODAY, May 25th is the Stockton City Council meeting. THURSDAY, May 27th is the Planning and Engineering Division meeting.

We invite you to attend if you can to make public comments to show our collective love of the Empire Theatre and the underlying importance of public cultural space, nurturing local economies, and historic preservation. Show your support by sending this super easy-to-fill-out automated mailer!

- Michael Fitzgerald contributed to this story.

Orion Camero (they/he/she) is the Projects Convener of Placeholder Magazine. They are a coalition-builder, visual storytelling educator, and community organizer with experience ranging from protecting the Delta waterways from corporate water privatization to global advocacy at the United Nations against the climate crisis. Orion is inspired by epic stories with ensemble casts, the fields of spiritual ecology and emergent strategy, and interdisciplinary thinking.