Last week I was welcomed by Daniel Trejo into his art studio Verge Center for the Arts. I was so excited to meet up that we started chatting in the lobby of Verge just as they were closing and did not stop talking for over two hours.

Daniel is a Stockton native artist who is a San Joaquin Delta College and University of California, Davis alumni. His work is mostly focused on very contemporaneous and process-focused, ceramic sculpture, and it has been exhibited at the ATM Gallery/Studio in Austin, Texas; the L.H. Horton Gallery in Stockton; the Panama Art Factory in Sacramento, and the UC Davis Undergraduate Research Conference, among others. 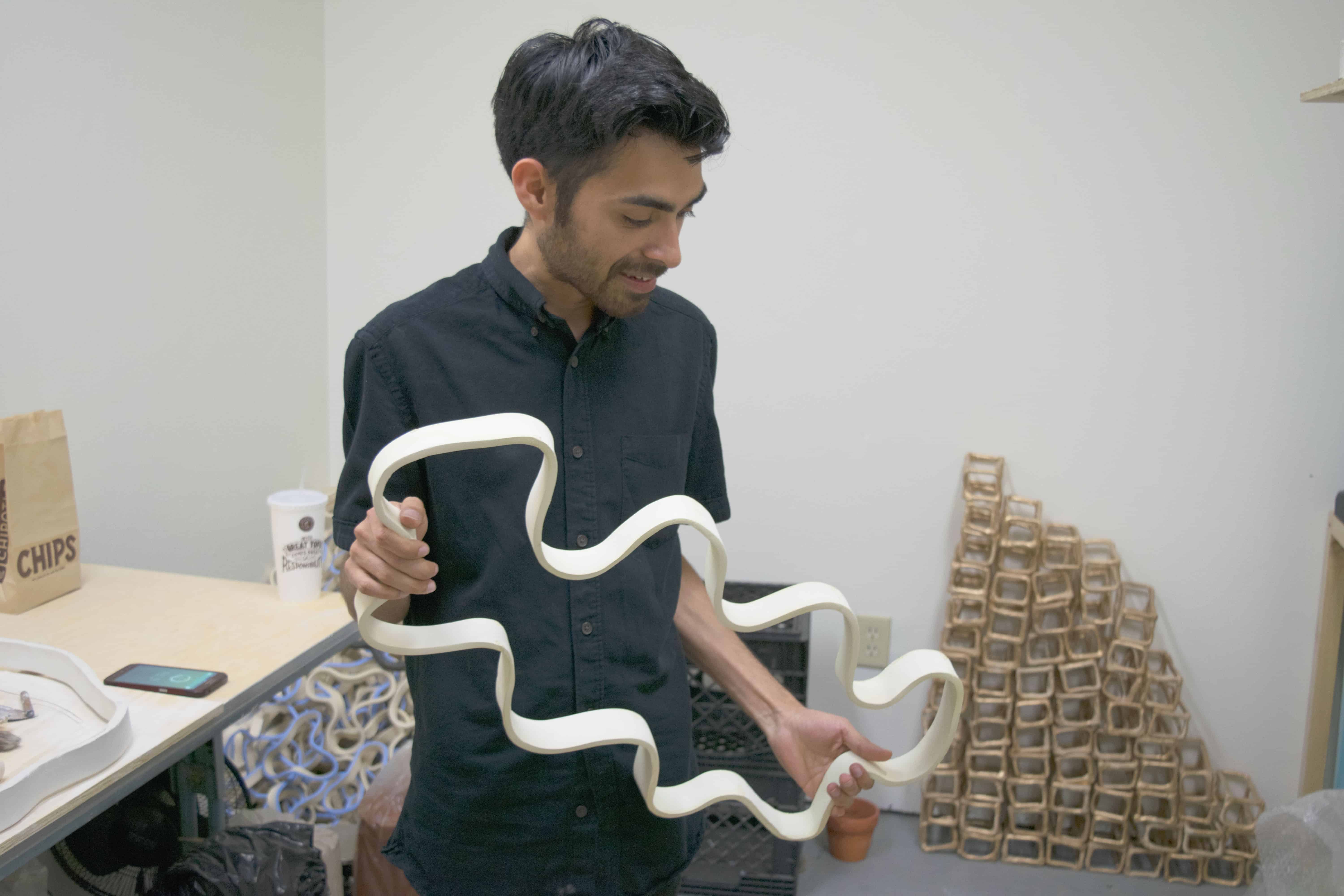 Our conversation started by talking about our shared experience in TB9 (Temporary Building 9) the famous ceramics building at the UC Davis Art Department, where Robert Arneson, the father of Funk Art, taught back in the ’60s. This building is now a historical landmark in the National Register of Historic Places, and it is the domain of Annabeth Rosen, one of the toughest and most well-respected faculty and ceramic artists around. 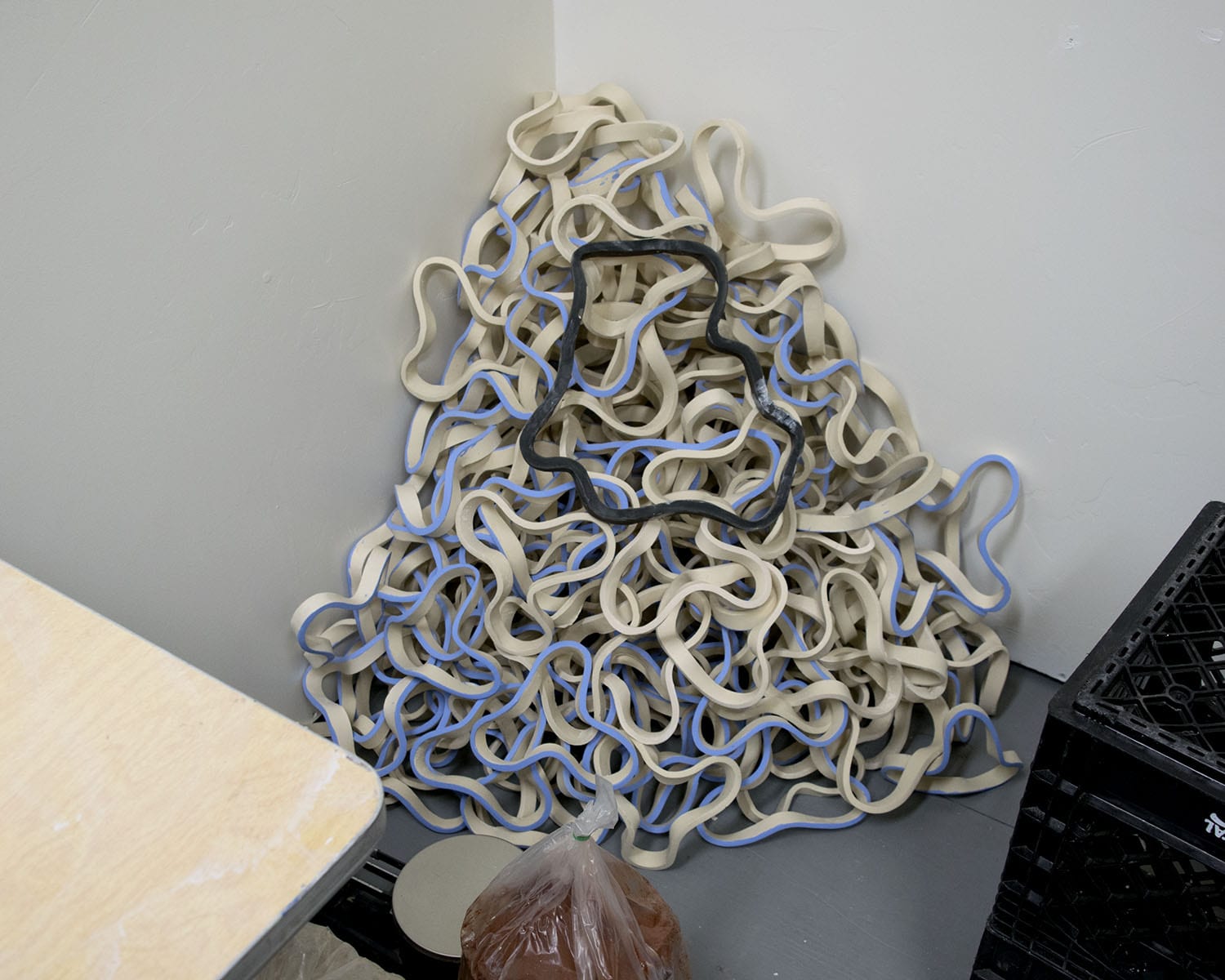 We also talked about the politically charged term “Chicanx;” the frustration of not seeing more contemporary work from Latinx, Chicanx (gender neutral ways to refer to Latin Americans and Mexican Americans, respectively) and Mexican artists around, and wanting more than the archetypes of Frida Kahlo and Day of the Dead imagery; our aspirations of moving to Mexico City because of its international significance in the current art world, and even about Stockton’s need for more gallery spaces and contemporary art. 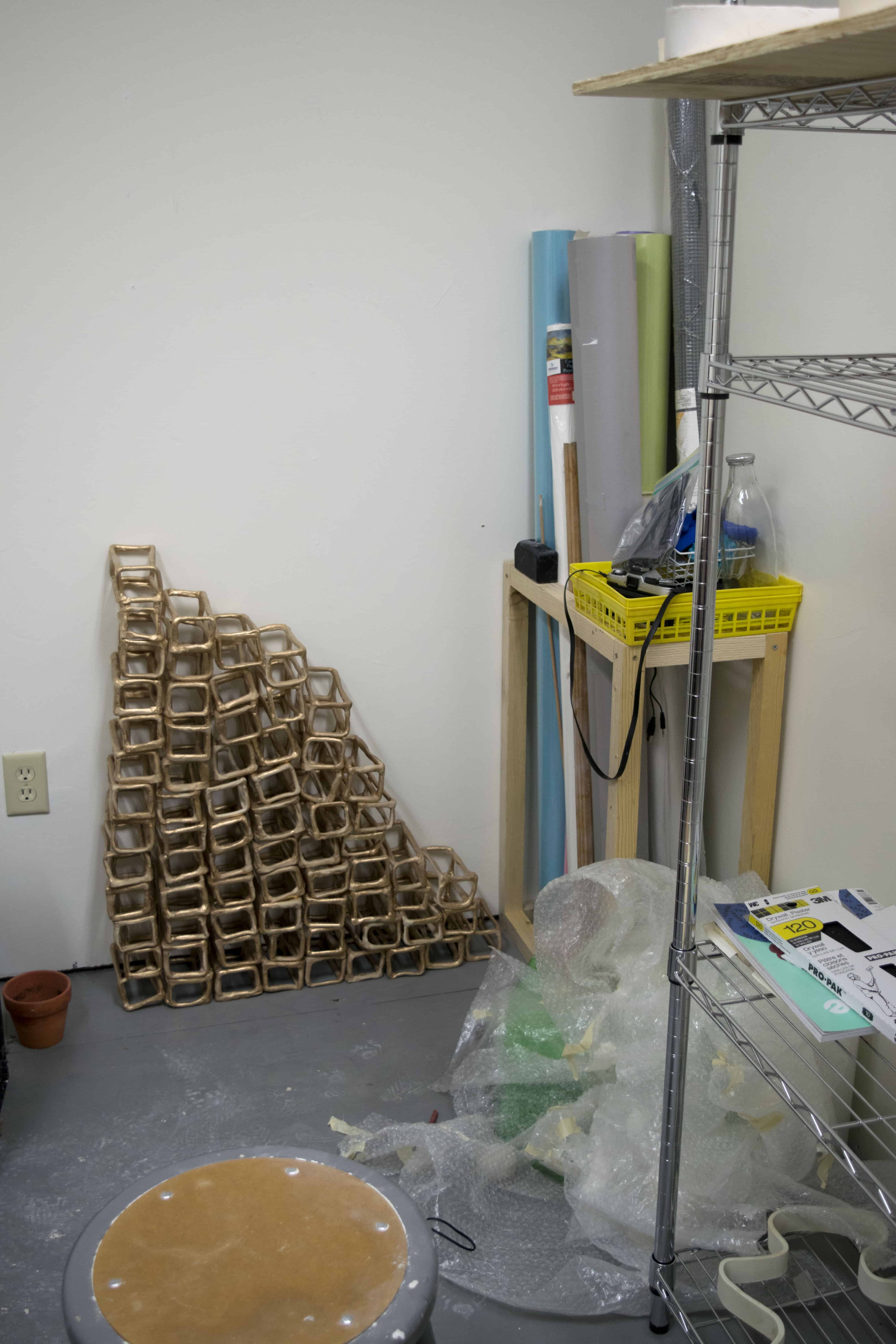 Daniel’s studio is up on the second level of the studio complex, and it is this narrow, white-walled cube filled with pastel objects, wood, and clay dust. The colorfield of the entire room seems curated to fit Trejo’s work. I immediately drew my attention to two installed sculptures at the left corner and back wall. We continued talking about his forms, which he usually calls “Rings,” a term appropriated from a viewer’s response to them. 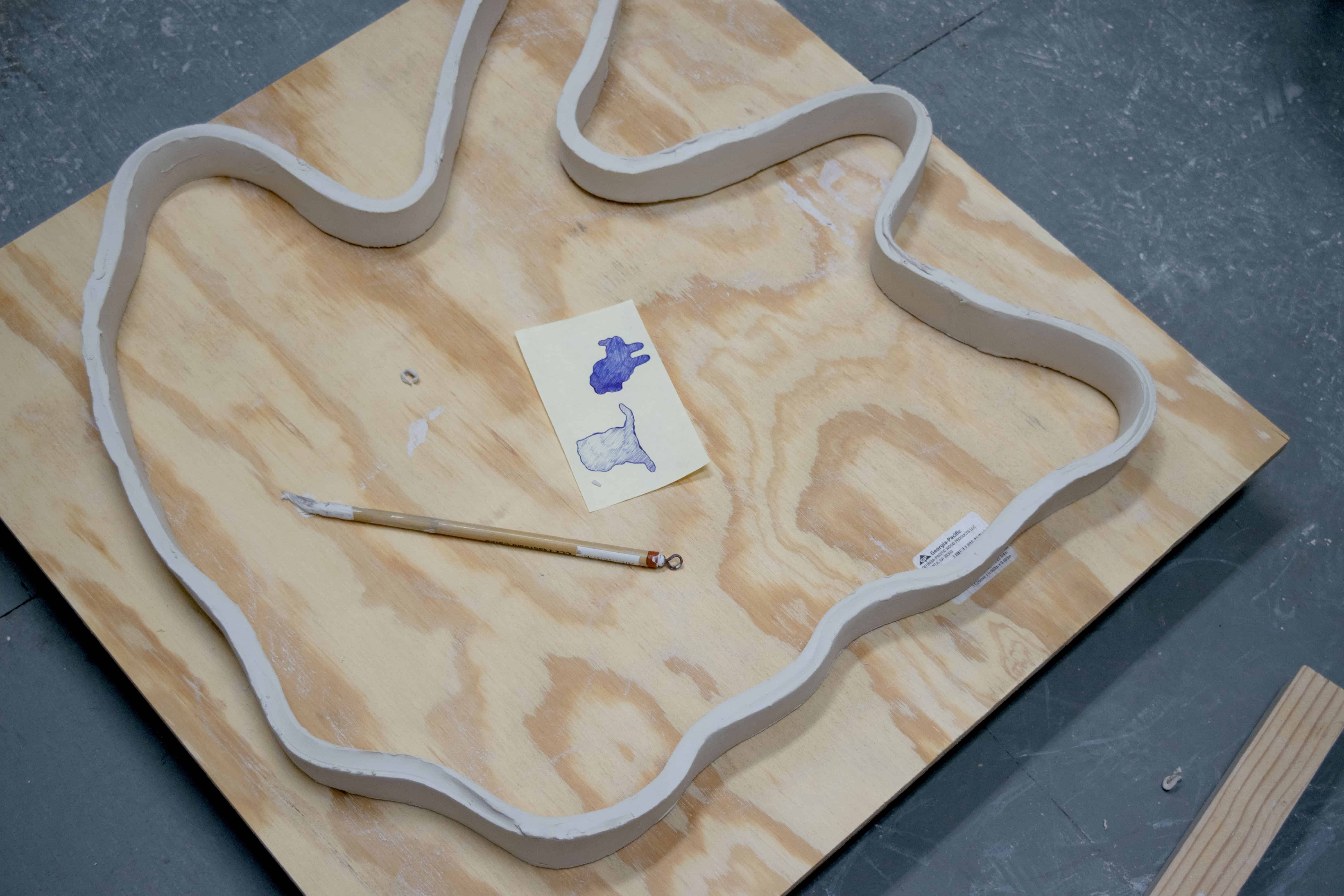 The rings are often confused for silhouettes of animals or creatures, but they are non-representational art objects. His rings are focused on absence, stability and fragility.

Trejo achieves spatial coordination and stability, while having personal and emotional relationships to each of the forms. 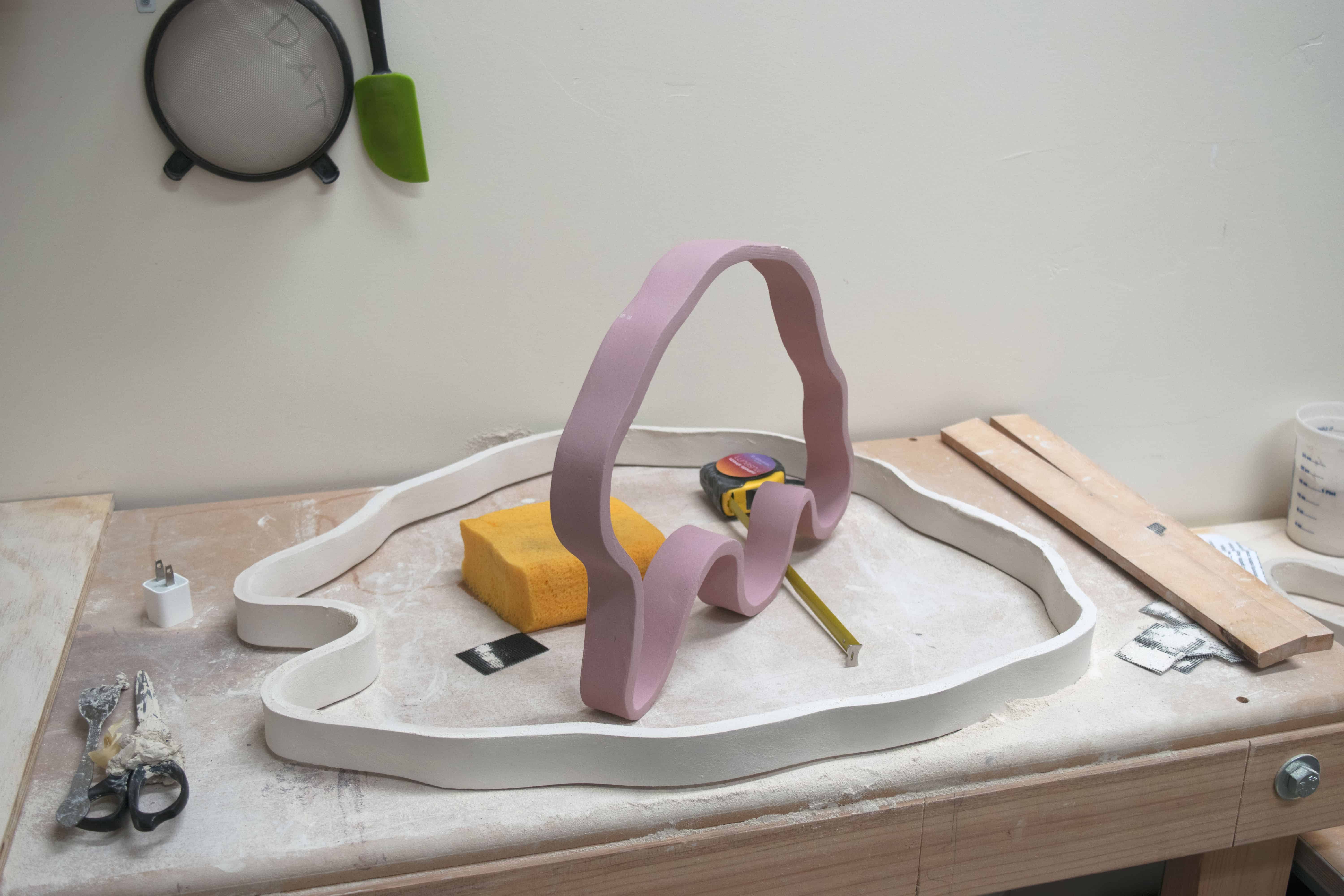 His first ring came from what he called a “failed attempt” at a large scale sculpture in his old studio space at Panama Art Factory. Trejo started to work and then traveled out of the country for Zona Maco, the biggest international art fair hosted in Mexico City. Upon coming back to California, the beginning stages of his work were to dry in order to continue being worked on, but the shape was so compelling, he began to experiment with making similar forms.

Listening to You Keeps Me Stable, 2016

Trejo places special care on color choices and their relationship to shapes in order to achieve a specific emotion. His shape and color choices seem to emanate from both taste and a place in the subconscious, and each piece goes through a series of edits until its final version is just right.

My studio visit ended by making note of Trejo’s new interest in exploring alternative structures to display his rings and other installation forms. Incorporating other materials to clay work has always been a great fascination of mine, so I am looking forward to seeing how this new idea develops in his work.

Aida Lizalde is a Visual Arts Content Curator and occasional contributor for Placeholder Magazine. Lizalde was born and raised in Mexico until age 15, when her family immigrated to Stockton, California. She currently attends the University of California, Davis in pursuit of her Bachelors in Studio Arts.