The arts of John Anton Malinowski and Kevin Zee produce an unlikely state of meditation. These two artists work in altered perceptions, repositioning our conditioned minds to engage with our embedded realities. Mal and Zee collaborate as NODDER on the video “Eject,” giving a gift to the dormant mind. By examining each artist’s prolific practice, one can gain a better understanding of “Eject.”

John Mal is a man of many talents, including writing and incense making, but his musical experiments are found online as Pelvic Dew. Mal has developed a discography of music that miraculously builds an environment in space and moves listeners through nonlinear passages. His soundscapes carry weight and character that takes novels hundreds of pages to unfold. Experiences like these trigger the sensory mind allowing it to arrive in dream-like spaces. The practice of space-making is a common thread in Mal and Zee’s work. 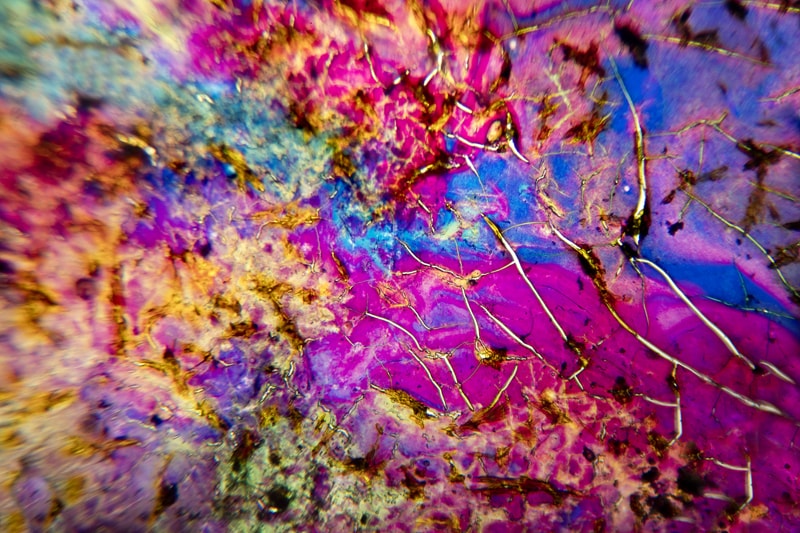 Yet another Renaissance man, Zee works primarily in photography and video, while also painting and making music. He works with a microscopic quality camera, capturing photos that take time to consume. The detail in Zee’s photos is astounding; close-ups of individual blood cells intermingling like plasma, plant matter reveals itself as carved crystal at a microscopic scale, and bits of trash become sculptural through his careful photography. His work invites viewers into a world reserved for scientists or dreams. Through slowing down time, Zee’s work crafts a practice of attentive appreciation.

When Mal and Zee come together, they produce a trance-like experience. Zee slows the viewer down as he guides the viewer through time and space, while Mal develops that space and gives time a sense of importance. “Eject” provides us with an opportunity to take time in unexpected spaces hinting at unfocused, unsettled motion.

Creating problems to work through keeps their creative practice open and malleable. When asked how they went about this piece, Mal and Zee wrote that they “listened to a planned experiment with inevitable unseen variables.” They were guided by Mal’s musical composition divorced from the video content, but when joined together, it created an aesthetic assemblage. Their playful approach to projects combats the daunting nature of most experimental art and creates a more accessible entry point for viewers. In their other collaborative videos, Zee and Mal continue to challenge themselves in molding spaces and navigating throughout them, as can be seen in their piece titled “Skin.”

To best experience these pieces, I suggest setting the videos to fullscreen, blasting the volume and putting all distractions at bay. Give yourself space to embark on an experience and be consumed by their work. To meet these makers in Sacramento, check out the R Street Block Party on June 24th, and support Vessel Incense by John Mal. And for our readers in New York, Grill Cloth, which features the musical stylings of Kevin Zee, will be playing at Trans Pecos in Brooklyn on August 5th.

Kevin Zee finds tools to view ordinary objects through different perspectives, endlessly experimenting until a natural pattern shows itself. His work now involves other artists just as much as himself. He incorporates efficiency and controlled experiments into his imagery. Kevin has an AA in Audio Production from American River College and a BA in Video Production from SFSU.

John Anton Malinowski is a composer of words and sounds, with a practice in making incense. He is the founder of Chapped, a national publication of creative writing. He moves in mysterious ways.

Here are two biological innovations swinging together in separate hemispheres in thanks.