What is beauty? Is it symmetry? Is it mental or physical? When does beauty start and when does it end? Who labels beauty? For years, New York artist Takming Chuang desired a masculine, toned, and youthful body, a perception shared by many, and endorsed by the media, peers, and overall society….

Back in June, I visited the UC Berkeley Art Museum and Pacific Film Archive (BAMPFA) to attend their 47th Annual Master of Fine Arts Graduate Exhibition, where Chuang, a graduating senior, was presenting his artwork. I was excited to see Chuang’s art not only because of the aesthetic beauty his works contain, but because of his use of a rare medium: unfired clay. 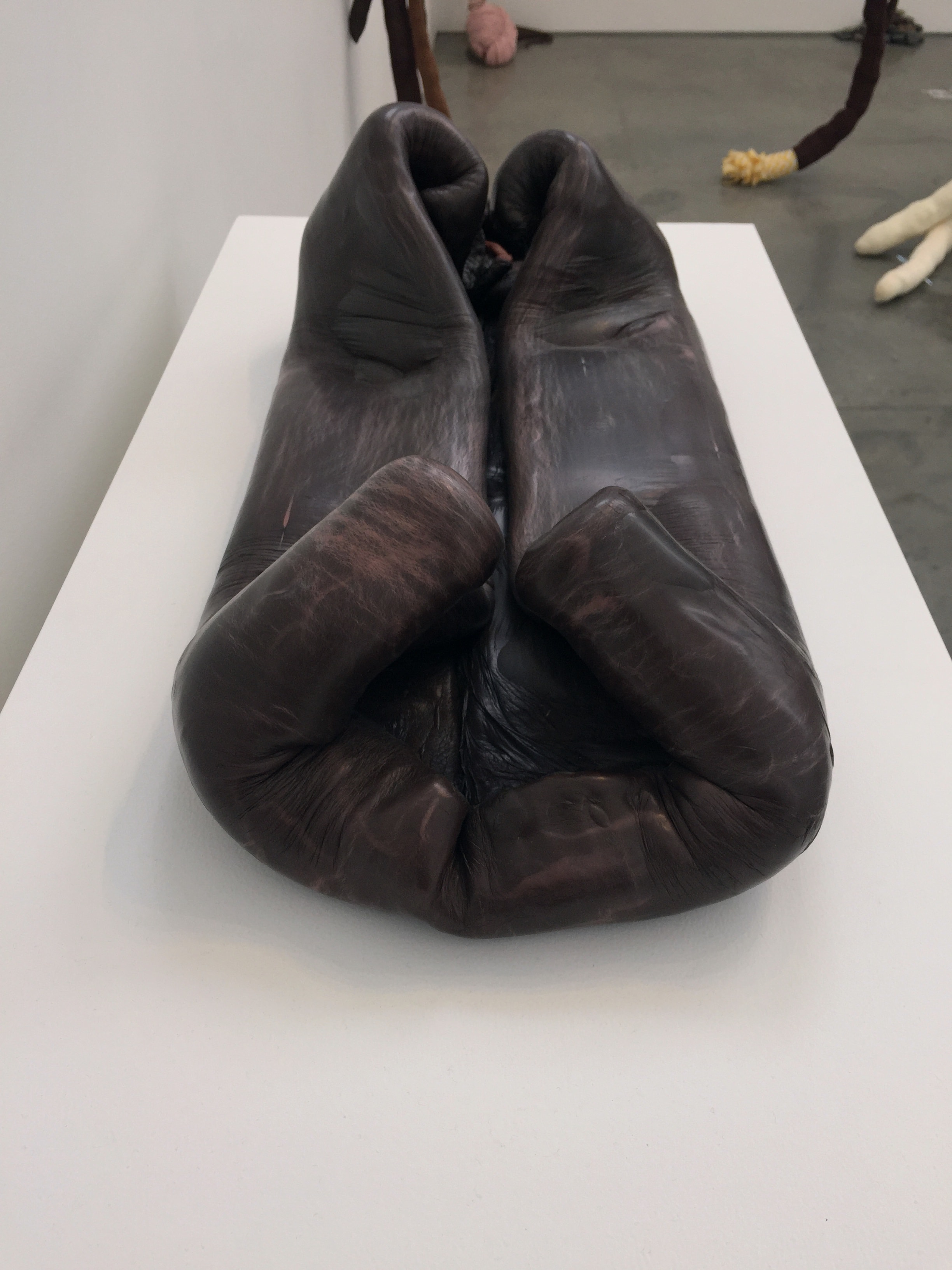 “When [the clay] shrinks, it wrinkles and cracks, same with our bodies…and then it does what you can’t control.”

Unusual within the art world, Chuang went from a corporate art world—where he was selling pleasure and ever-lasting beauty—to developing a softer and more personal experience with his art. Although he loves his native Manhattan, Chuang sees his home city as materialistic. In New York City, everyone to whom he talked to about making a switch over to the arts was horrified that he would want to move in that direction.

When he took up painting, Chuang was working as a project manager for Hyatt Hotels in Manhattan. His pleasant paintings were sold to Hyatt and displayed in their hotel lobbies and restaurants. But Chuang eventually went to work for GAP, Inc., during which time the company encouraged him to pursue interests outside of work, including those that allowed him to develop his artistic side. He pursued his love for the arts by exploring mediums aside from paint, including sculpture, photography, and printmaking, which all came before ceramics.

For Chuang, the stereotype of art majors giving up and going back to college to study something more lucrative was turned upside down. His undergrad was in business, yet his success in the corporate world made the shift into art all the more shocking and terrifying, but nevertheless exciting.

Although these opportunities in New York allowed Chuang to find which medium worked best for him, in many ways, the West Coast seemed more receptive of his decision to swap careers. He became inspired to apply to UC Berkeley’s Master of Fine Arts program, where Chuang decided to use unfired clay, a medium he had never worked with; a new medium for a new life. 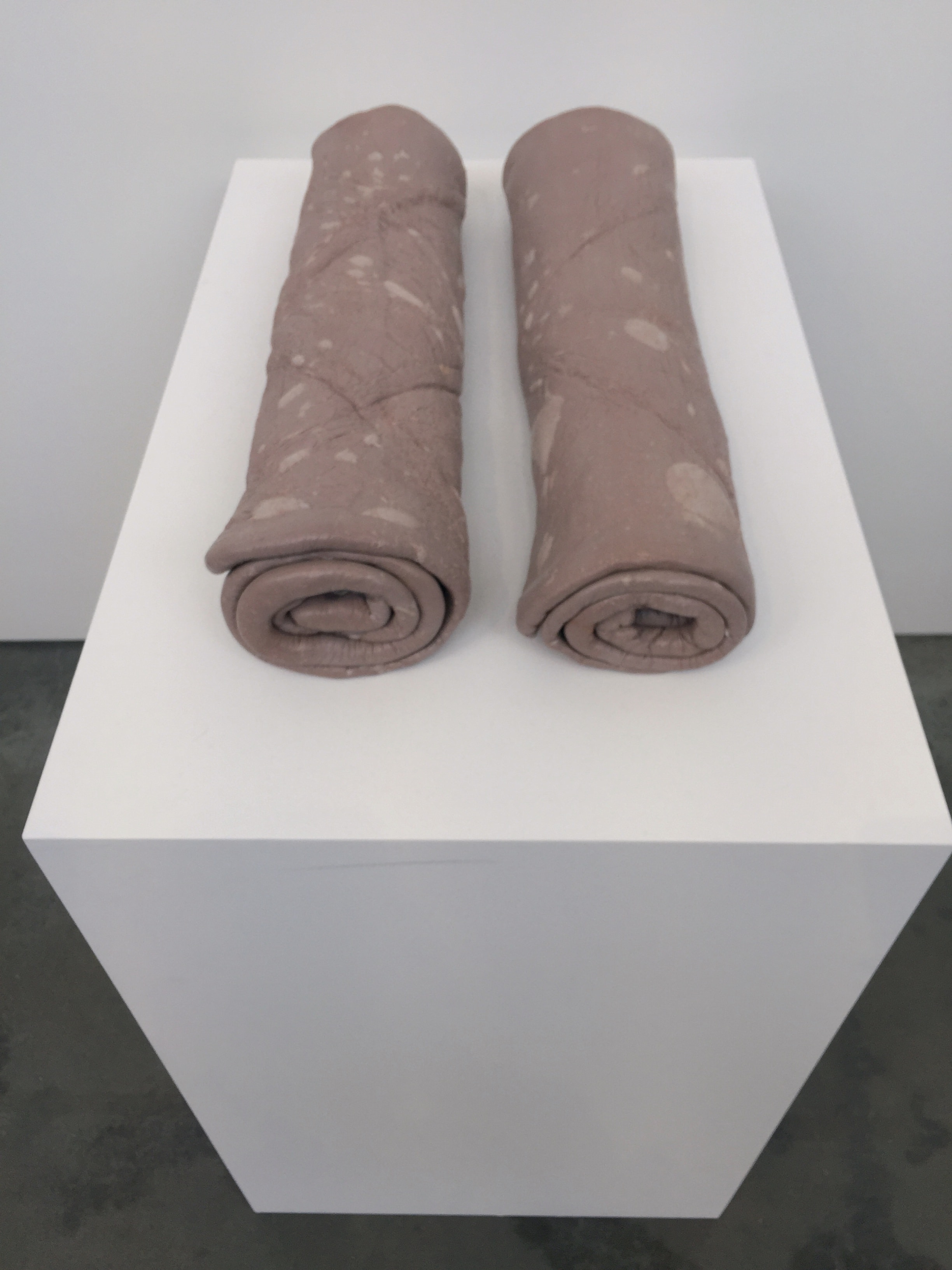 For the MFA exhibition, Chuang drew inspiration from his own body. He explains that clay was the “best placeholder for [his] body, because it performs on its own. When it dries, it shrinks, and just like our body, it has water. When we get older we shrink, and then when [the clay] shrinks, it wrinkles and cracks, same with our bodies…and then it does what you can’t control.” Chuang’s technique of using a plastic skin to encase unfired clay is unique not only because it helps to retain the clay’s shape, but also keep its moisture. My curiosity led me to ask if these shapes take place organically, or whether Chuang works with a preconceived notion of what the sculpture will look like. Chuang replies that he does not have any preconceived notion of his finished work, since the clay is very “weighty.” His physical capability to lift a certain amount of clay limits how much he will use for his works. 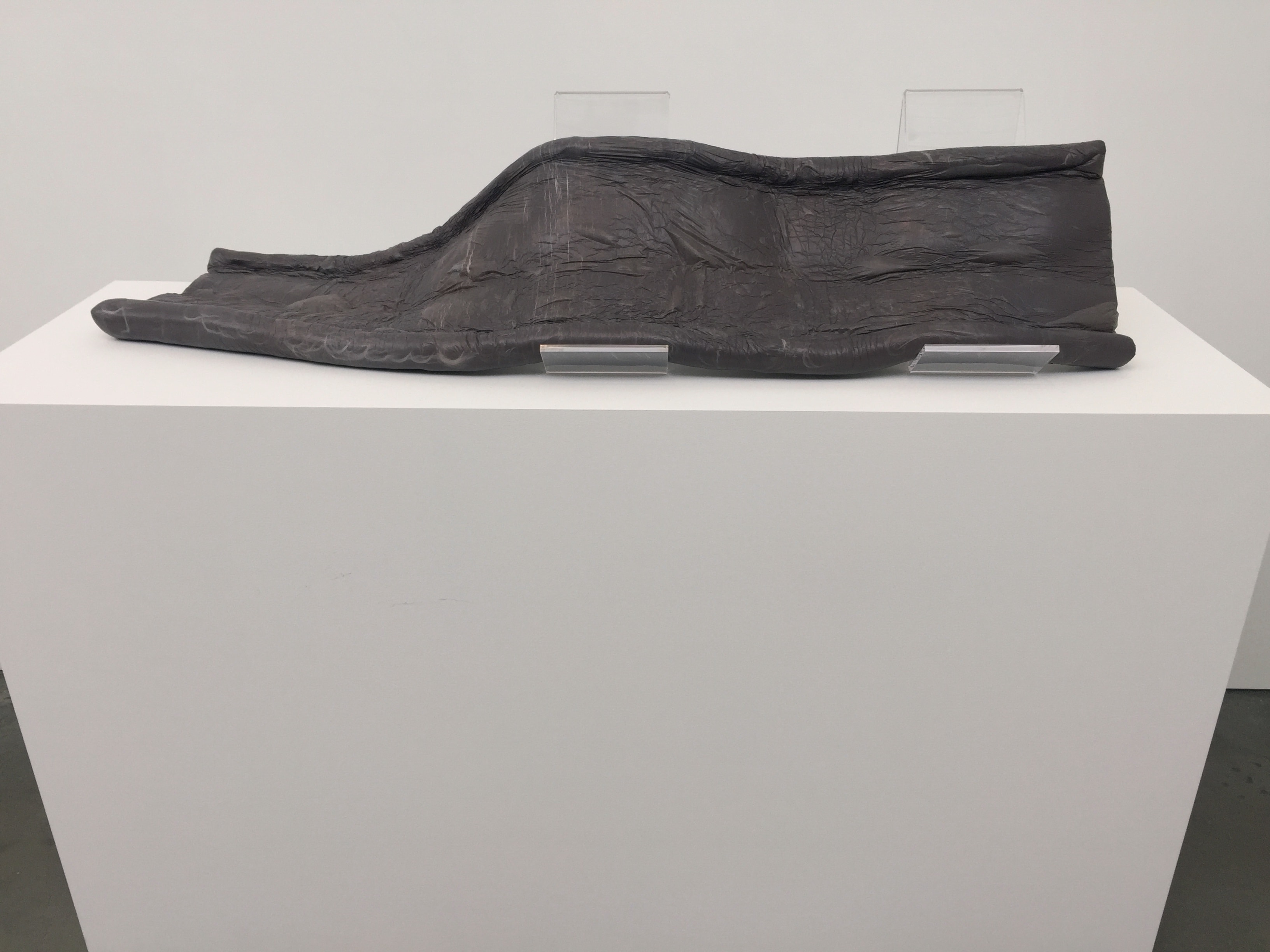 An important and recurring theme among his works is the preconceived notion of our physical selves—how we perceive our bodies in terms of physical beauty. For instance, in addition to the weight of the clay, Chuang also thinks about the role that origami plays into it, “because the way I work with is as if [I’m] folding a sheet of paper, because [the clay] begins as a slab.” Symmetry plays into it because he thinks about the body and beauty.

In many of his works, such as “Fiona,” Chuang emphasizes his value towards the medium of clay itself. He also places value on superficial aspects of his very own body. For instance, as time passes, Chaung questions how his own body is physically aging. He asks himself deep rooted questions—questions that serve a fire to discovering how he goes about molding his outlook on life: “When do you stop caring about the way your body looks? If I am no longer sexually attractive or physically productive, am I economically futile now? Am I a useless member of society? And how does my body function economically?”

Needless to say, Chuang’s experience with clay has left him quite satisfied; he has been able to explore the body as well as reflect on his own body by using clay and watching its natural state transform before him. He is able to explore the clay’s “weight, its sensuality, its wrinkles and the way it changes daily in its environment.”

From the materials he uses to the naming of his pieces, Chuang’s personal spiritual beliefs have been a major influence in his work. When referring to his piece “Aquaduct,” Chuang says he believes in “Buddhist philosophy and reincarnation; clay can be reincarnated. Those can be unwrapped and re-used; you just have to re-wet the clay and then you can re-make. And the ‘aqueduct’ was just the idea of it looking like a long thing, running water, how water stops running. A ruin so old, but still appreciated for what it looks like.” 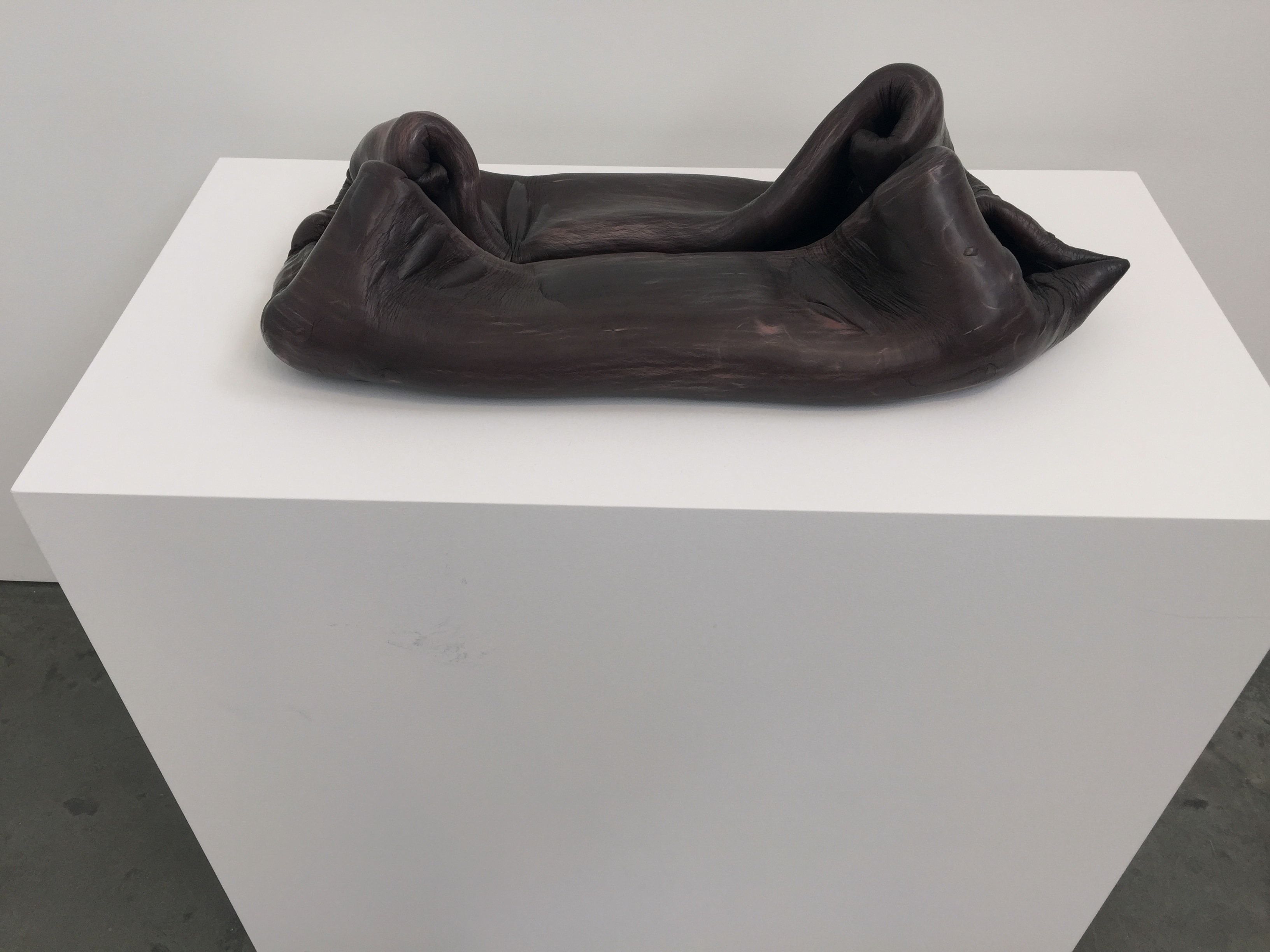 I asked Chuang if he was influenced by other artists within the MFA program and whether he thought he had an influence on any of them. Chuang believes that there was indirect influence that “organically happens [in which] some of our work might bleed into each other with regard to physical process, or maybe with regard to points of view.” He emphasizes that his peers’—as well as his own—perspectives were what influenced his own work, since they discussed art theory and had critique for three hours a week. Having discussions with his peers has shifted Chuang’s perspective on many different levels, especially given that before he “never knew [he] had so many blocks, blind spots.”

At the core of Chuang’s work is not only the use of his own body and the perspective on the body itself, but also his soft approach to death. For instance, Chuang questions about the preservation process—that having a set of instructions about looking after his works would mean turning over control of his works.It would also mean that the value of what is important to him would shift, as he wonders, “At what point do they stop caring for it? And at what point do they deem it not valuable? Then the question is, ‘Am I trying to take back the power of art? Or the value of art? Or am I a control freak?’ These are future unknowns! Those are projections into the future.”

The fear—or rather the loss of possession—seems to be what Chuang struggles with, which is relatable. There are many items in life we, as individuals, claim control or possession over. When does that really stop mattering? His questions of self-exploration and desires, led me to question my own set of values and desires, to start digging as to what is my “ultimate” goal is—whether it be physical or mental. Maybe Chuang is right, we’re control freaks? The control, or lack of control over life is what he captures in his works, the aesthetic beauty of life and death coming from the forms created out of the clay.

With Chuang flourishing with new outlooks on life and exhibitions it is exciting to see what new works he will come up with next.

Connie Reyes is currently an undergraduate at California State University, Sacramento majoring in Art History with an emphasis in Modern and Contemporary art. She enjoys reading and exploring new artists in Sacramento and the surrounding areas. In her spare time she likes to read, go to concerts, create art and jewelry, and knit.