There has never been a presidential election quite like the election of 2016. On November 9th, 2016, the result had been confirmed: a reality television star was to be the next president of the United States of America.

The day following the election was a somber one. Cities were still and faces were long. That is, until darkness descended onto metropolises across the country. When the workday finished, thousands of people around the US drove, marched, and rushed to city centers, settling in for a few nights of protest that would purportedly turn violent.

Oakland, California, is one city that faced the consequences of the election. Protesters flooded Frank H. Ogawa Plaza while shouts of “Not My President” echoed through the streets. However, Oakland was not the only site of active political participation. Social media sites, such as Twitter, Periscope, and Facebook were ablaze with protest news and updates, proliferating the media waves with false information.

Overwhelmed by the diversity of information, I took it upon myself to travel to the Downtown Oakland protest to discover the impact of digital media on political participation and audience consumption, and to explore how individuals come to negatively perceive political activism through framing. 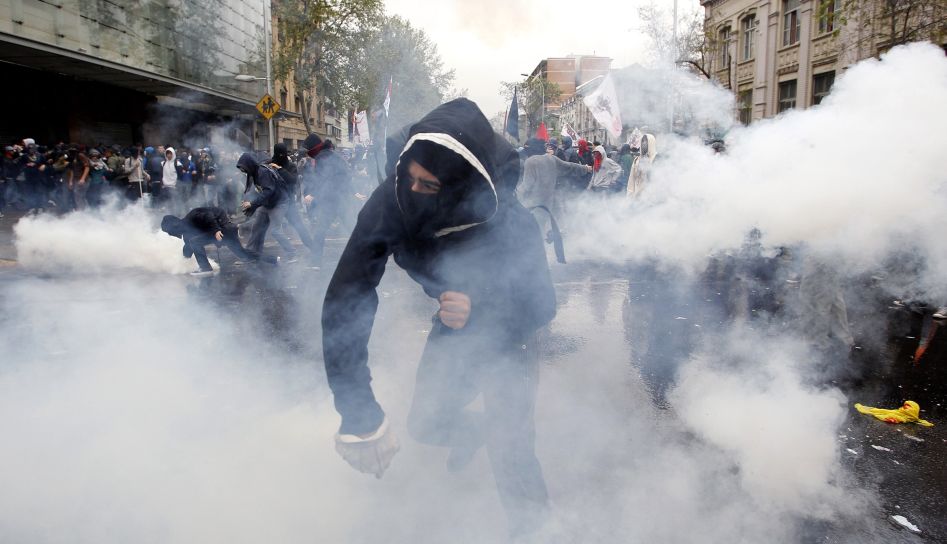 I raced toward Downtown Oakland, devouring French fries in lieu of a real meal. My appetite for political activism outweighed the hunger I felt in my stomach, and I was not alone. People snapped photos and videos of police cars zipping by, and the roar of the crowd reached a crescendo as cops’ stun grenades snapped at the crowd. Looking at my phone and the swarm of people in front of me, I realized the battle against racism, bigotry, and President-elect Donald Trump was being fought on two fronts: online and in the streets.

In many cases it seemed as though it was the press versus the people due to news outlets’ framing of the protests as riots, causing the public and journalists to think of the protests as violent events. The San Francisco Gate emphasized the destruction and fires that consumed the city, while protesters defied the instructions of officers. The Daily Mail in the United Kingdom identified the protestors as “angry mobs” that “attacked police,” calling Oakland’s protest a “violent rally,” then a “riot” in the same article.

Articles like these are framed in a way that began to alter audiences’ perceptions of the protests. When journalists frame a story, they are pointing out parts of the story they want audiences to focus on, while often omitting points that don’t fit with the writer’s intended message.

“When fake news merges with real news, audiences may find it difficult to separate fact and fiction”

Framing of the Oakland protests had divisive effects on the public. I interviewed Oakland local, Anthony Mendoza*, who stated that “whenever [the media] show videos, they try to get the worst thing that will happen during the protest, like fire or broken glass.” As someone who was at the Oakland protest on November 9th, Mendoza asserted that the news images were not accurate portrayals. “People marching peacefully,” he added. “That’s what you don’t get to see.” 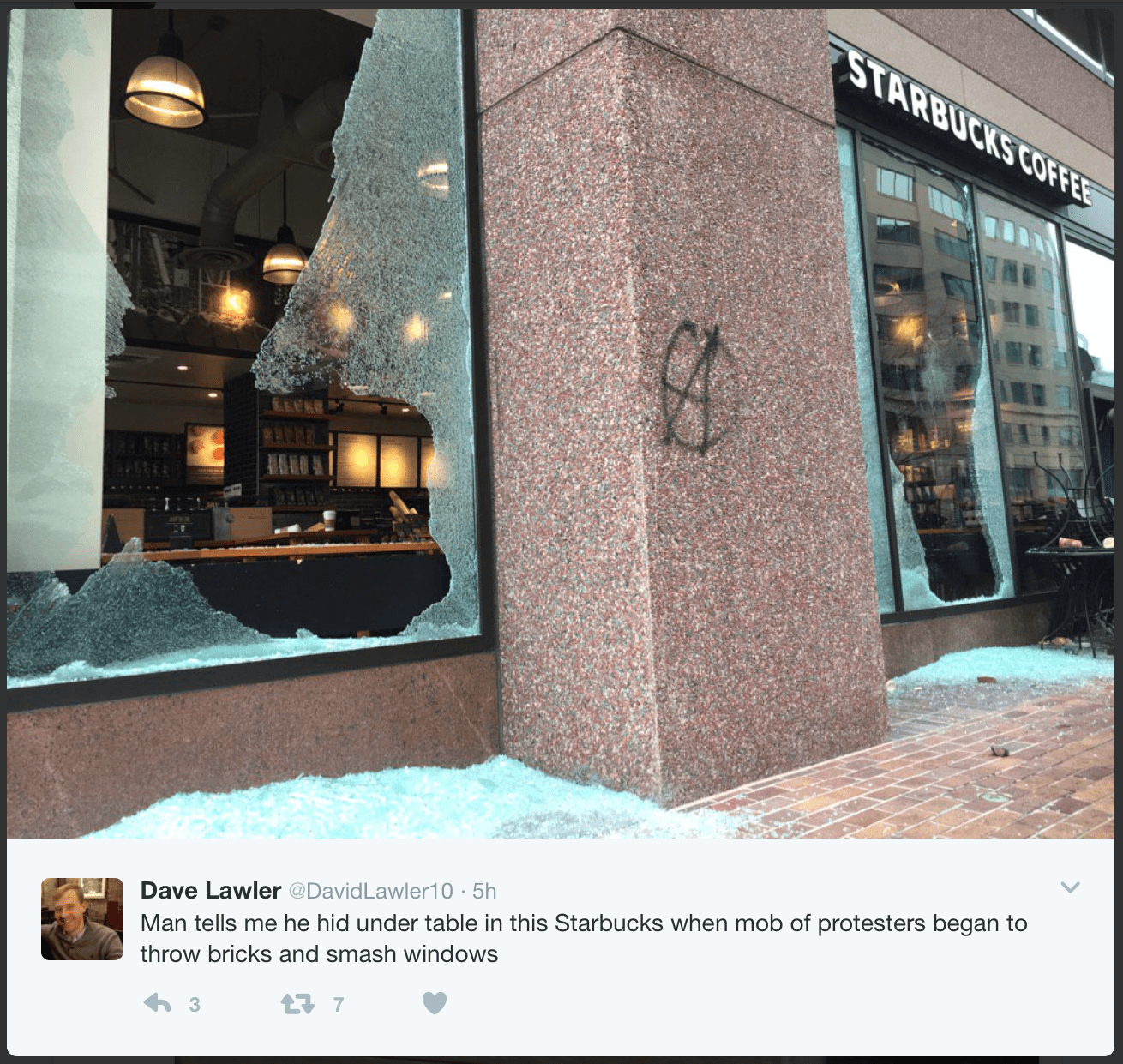 The proliferation of social media in everyday lives also plays a part in the way people perceive protests. In Texas, one Tweet by a man with around forty followers gained attention around the country. The man, Eric Tucker wrote, “Anti-Trump protestors in Austin today are not as organic as they seem. Here are the busses they came in. #fakeprotests #trump2016 #austin.” Photos of buses a few miles from a Trump protest accompanied the Tweet. By the time it was confirmed that the busses were for a software conference and not for paid protestors being bussed to different sites, the false information had spread like wildfire, making headlines and having been shared more than 300,000 times. When fake news merges with real news, audiences may find it difficult to separate fact and fiction, especially when tensions are running high and people feel as though their lives are at stake.

Social media platforms like Twitter can bring people together with hashtags like #NotMyPresident, #FuckTrump, and #OaklandProtest, while the ability to share posts and events on sites like Facebook allows people’s beliefs and activities to reach a broader audience. However, when anyone can post anything on the Internet and call it news, it can undermine the actions of those involved in protests. 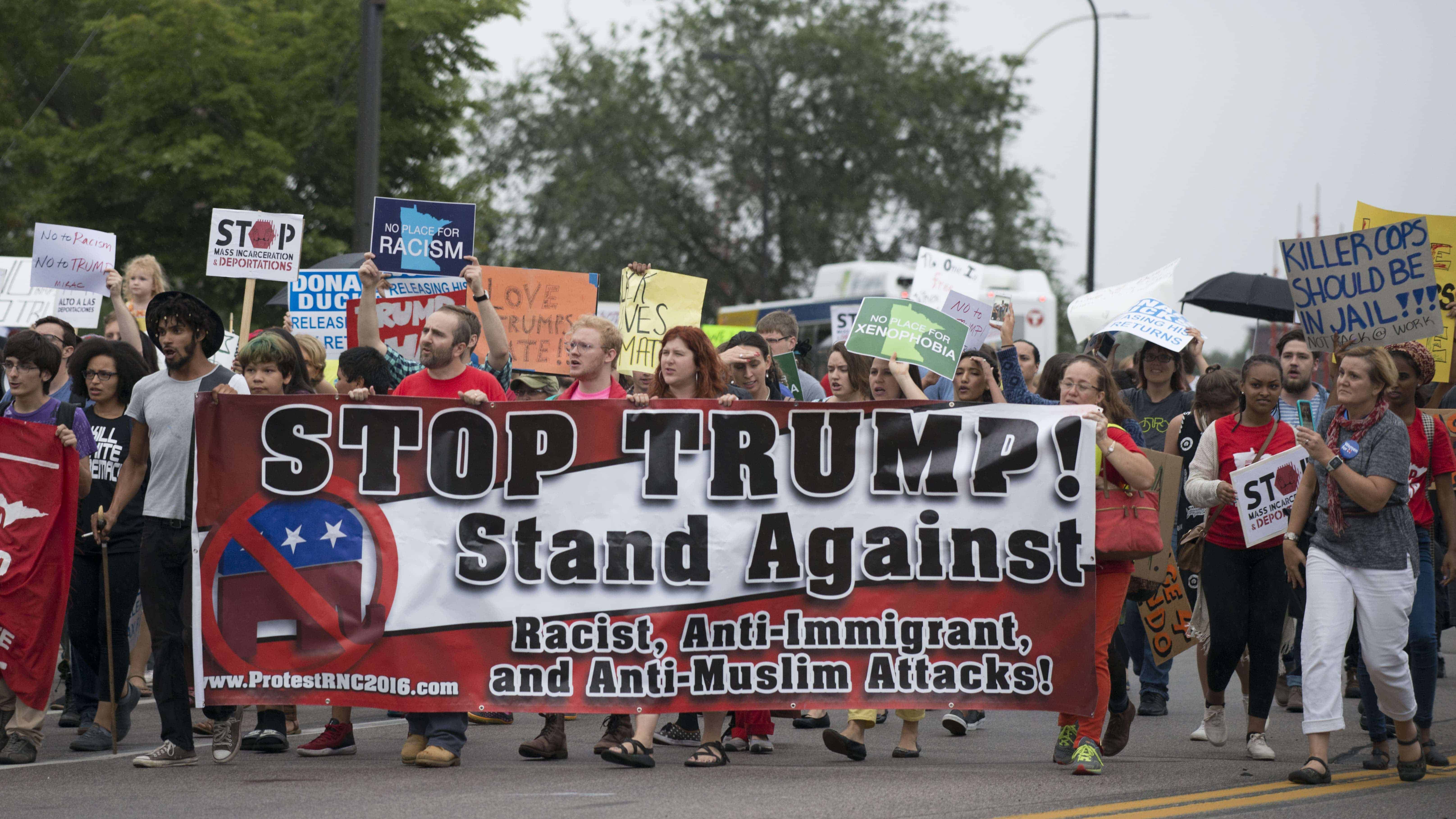 Streams of information had flooded Twitter and Facebook the night of November 9th; some called people to participate in the movement by joining event pages or tweeting locations, while others made posts to counteract the protests. News of the protests had split people apart, even making them afraid to leave their homes.

Some individuals, like Alex Campbell*, wanted to join the movements, but were frightened. In our interview, she conveyed her concern: “I’ve always wanted to join [a protest]. I think the main reason I haven’t is because I’m scared. I’m scared for my life – not because I think that protestors are violent, but because I’m afraid that cops will hurt me.” Her fear is one that many share and is admittedly instilled by media’s portrayal of police brutality, but sharing accurate information and voicing concerns online, while altering consumer habits, become her ways of protesting.

Some critics may claim that Campbell’s social media presence is a form of ‘slackitivism,’ where participants enact change through cheap and meaningful ways, like adding a flag filter to a Facebook photo, or posting a meme professing solidarity. To these critics, sharing posts or consorting with others is not enough for political action. While this may be true in some cases, social media is not “a replacement for real-world action but a way to coordinate it” and “increase[s] shared awareness by propagating messages through social networks.”

As I sat in my car watching protesters clamber to their feet and surge through a barrier of cops, I realized that these anti-Trump protests were only the beginning to a tumultuous four-to-eight years. I was back home by 8 p.m. watching the live feed of the protest in two windows side-by-side on my laptop. One was from a news organization; the other was from an out-of-towner’s personal Periscope account. Even though I was no longer at the protest, social media made me feel as though I was an active participant. I felt as though I was really there through my ability to keep up with what citizens were reporting; however, news organizations still have a tendency to skew what really happens at demonstrations and protests. 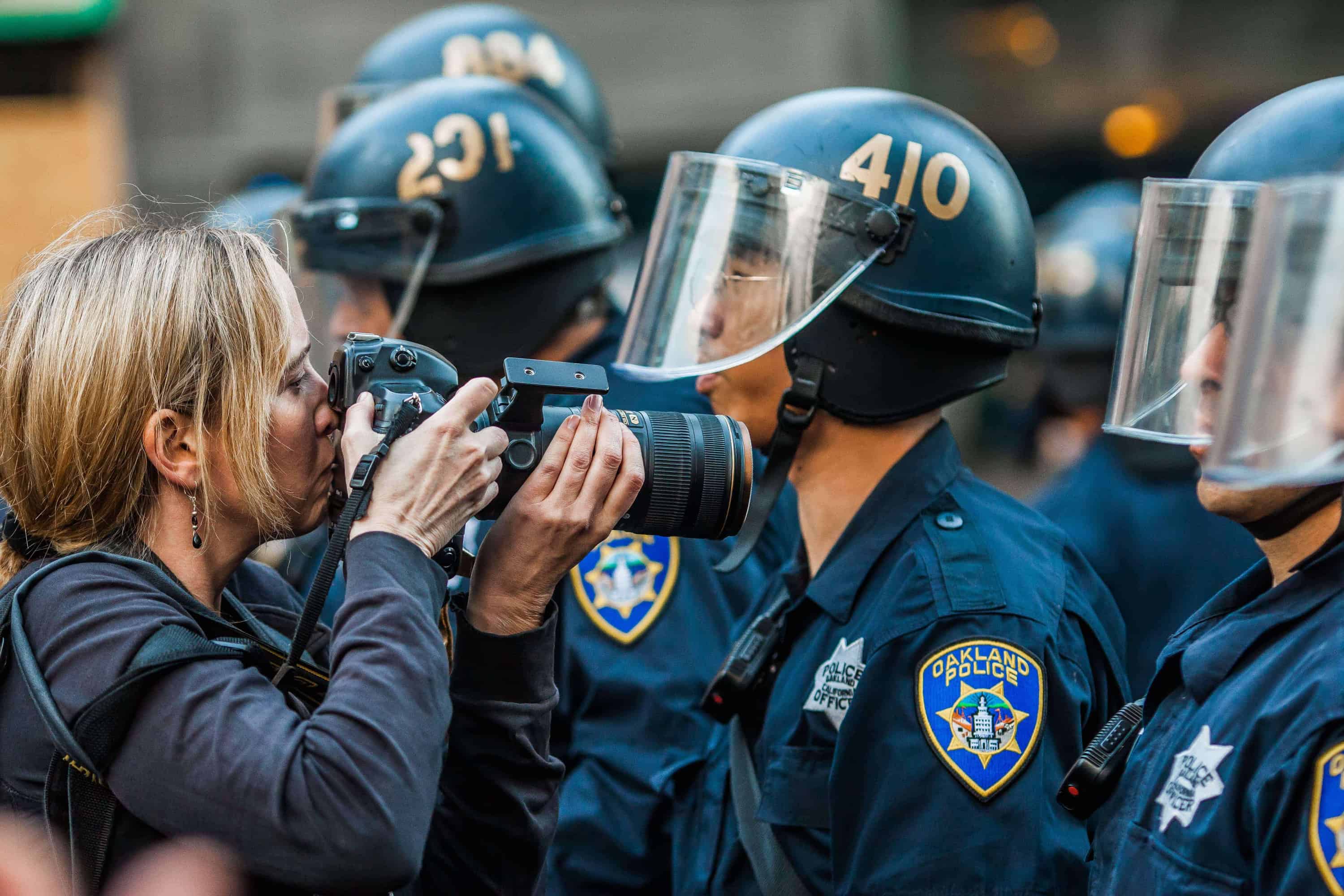 Studies have shown that news organizations are attracted to protests because of the controversy and conflict. Nearly every time there is a protest, news outlets like to include words in the headlines like “violent,” “riot,” and “attacks.” Later videos that borrowed from the streams shown on Periscope, Facebook, and Instagram displayed images only of the fires and rowdy individuals, thus framing the protest within content shared online. The combination of framing and social media ultimately causes conflict and confusion as people consume news at face value.

Protests stir varying emotions in the people who read about or watch them. For people like Mendoza, protests are a means of standing in solidarity with fellow people of color. For Campbell, protests are both exciting and unnerving. Both Mendoza’s and Campbell’s opinions of the current events are heavily influenced by the media they consume online, as are the opinions of any active audience. The truth is that the Oakland Anti-Trump Protest was not black and white. Yes, the protest turned violent, but only for a select few; it was violent for those who wanted it to be, and peaceful for those who marched calmly and without fear. Even police will admit that, “7,000 people turned out for the protest, though the criminal behavior was confined to a much smaller number.” Yet one study by a man named Julian Gottlieb at the University of California, Santa Barbara, stated that “confrontational protest tactics, such as getting arrested,” or in Oakland’s case, starting fires and smashing windows, “will increase news attention to a protest.” 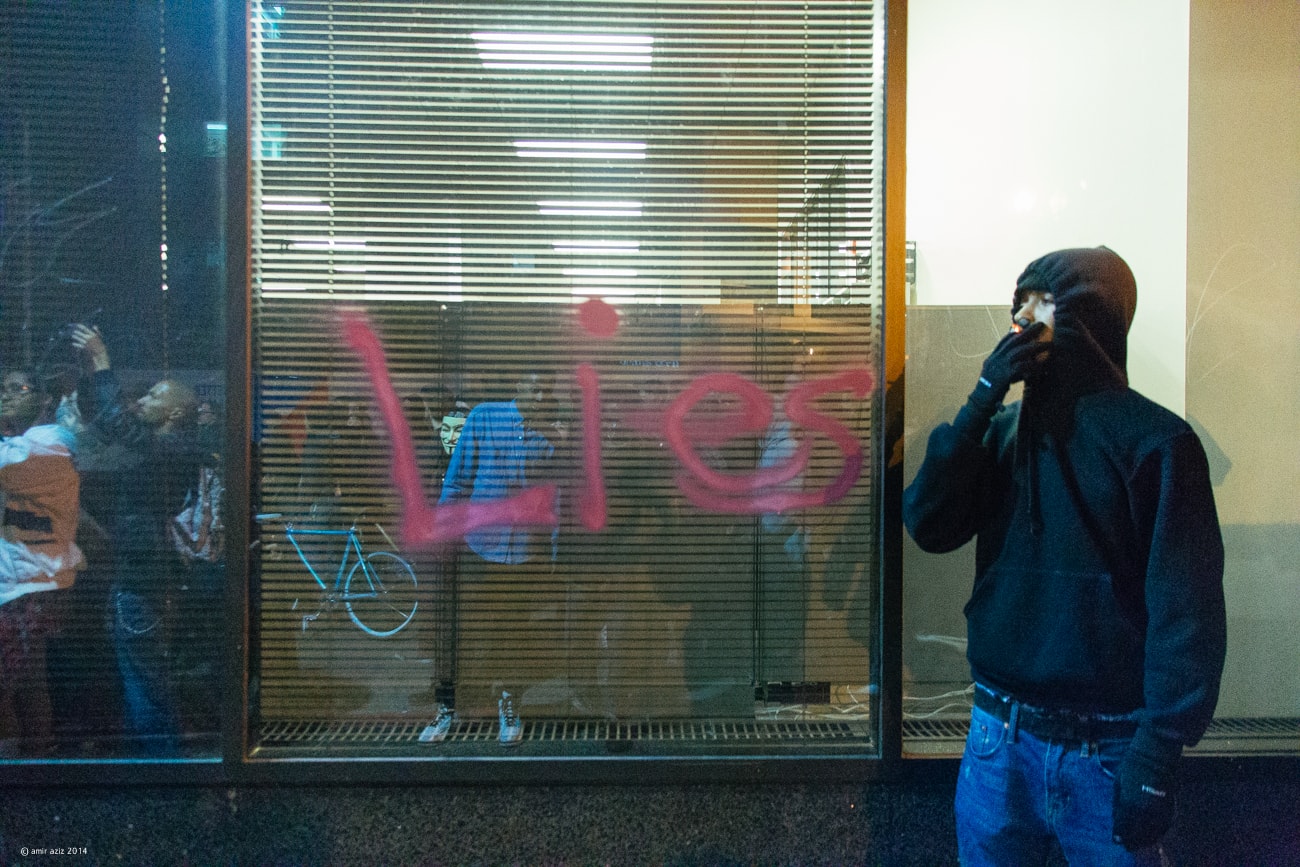 Unfortunately, the tactics of a select few were what the media focused on, but people came together to combat the framing, false information, and began to organize with social media by taking to the streets and posting raw footage and commentary of events as they unfolded. A large and diverse group is necessary for a successful movement, and “this is particularly true if people who are not ordinarily activists begin to participate.” Digital media, like phones and computers, can be the catalyst to recruit people and inform others, as opposed to breeding grounds for false information.

While at the protest, I saw locals pulling over to put out fires, strangers linking arms in solidarity, and citizens clearing debris from sidewalks. People were not just fighting for their rights, but they were helping one another in their community. News framing and social media often depict Oakland as a shadowy, violent place, but there is also light to be found within the city, sparked from online organization and fanned in the hope that media’s effects will ignite civil discourse and political mobilization.

*names have been changed

Summer Migliori is a Stockton native who studies media and English at UC Berkeley. Previously the editor-in-chief for Placeholder's magazine, she can now be found writing for and editing various publications when she's not tweeting, criticizing TV, petting stray cats, or working at the University's library. She's a firm believer in getting the facts straight and the importance of memes.