We all have our vices—substances that we take to escape the harsh realities of the world around us. Some people indulge in junk food and sweets, and many find sweet release in a bottle of alcohol. My own vice is the cigarette. There are a few downsides, sure: smelling like an ashtray from a short period of time after every smoke, the destruction of the little cells in the lungs that filter oxygen, the sheer addiction to this substance and the knowledge that it is only a matter of months or maybe years before it starts fully poisoning my heart, my lungs, and my mind. It’s dangerous and does no substantial good for my body, and yet I take a drag. There is no doubt that the cigarette is a powerful vice. But in terms of vices, I’d venture to say that Stockton might be more powerful.

This city was founded under the boots of prospectors on their way to gold country, used as a stopping point for some R&R in the forms of gambling, prostitution, and other illicit vices. One hundred sixty-eight years later, the city has changed much from the days of the Gold Rush: The once booming downtown—once home to Weber’s Point Park, the old Macy’s department store, smaller shopping outlets, and the Filipino community of Little Manila—now contains mere shells of these once inhabited buildings. The people who’ve taken up residence in these shells float around like smoke filling the air.

All of this was supposed to help young artists be seen and heard? It was unbelievable at the time.

Like most downtown areas of major cities, Stockton’s downtown has its centers for law and infrastructure: On the far end of the intersection between Weber Street and California Street, is the San Joaquin County Courthouse; if you go a block down and to the right on El Dorado, you will find the Stockton Police Department, home to our very overstretched and underpaid police force; if you decide to go north of El Dorado, past the movie theater, you’ll end up at City Hall. In February of 2012, the city filed for bankruptcy, due to heavy fiscal spending and the devastating effect of the housing crisis. The city spent a combined total of 134.5 million dollars for the cost of both the ballpark and the arena. Ultimately, downtown commerce paid the price. 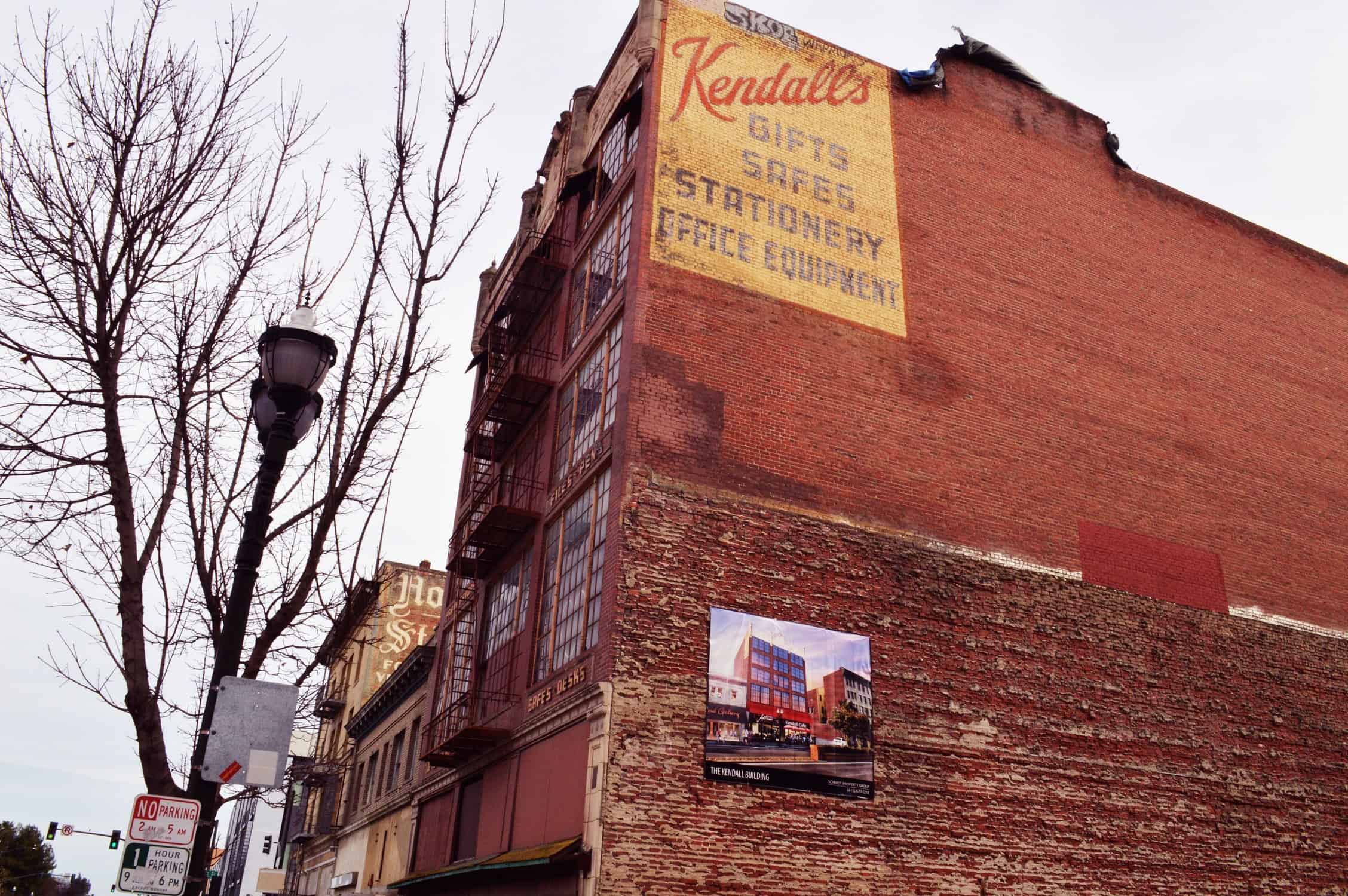 Businesses moved North to cheaper commercial properties in the Miracle Mile and Lincoln Districts. Thriving restaurants and clubs closed their doors and moved their business elsewhere. The mom and pop storefronts burned out to the butt, while the corporate-funded businesses managed to maintain their overhead cost, even though they were receiving limited clientele, the majority of whom were soon scared off by hordes of homeless and transients migrating in waves from the Southside. The recession was in full bloom, and the idea of opening a business in the downtown area was considered suicidal at best. At night, no one felt safe downtown: the police were busy trying to control isolated incidents flaring up all around the city, ignoring the fire in their own backyard. 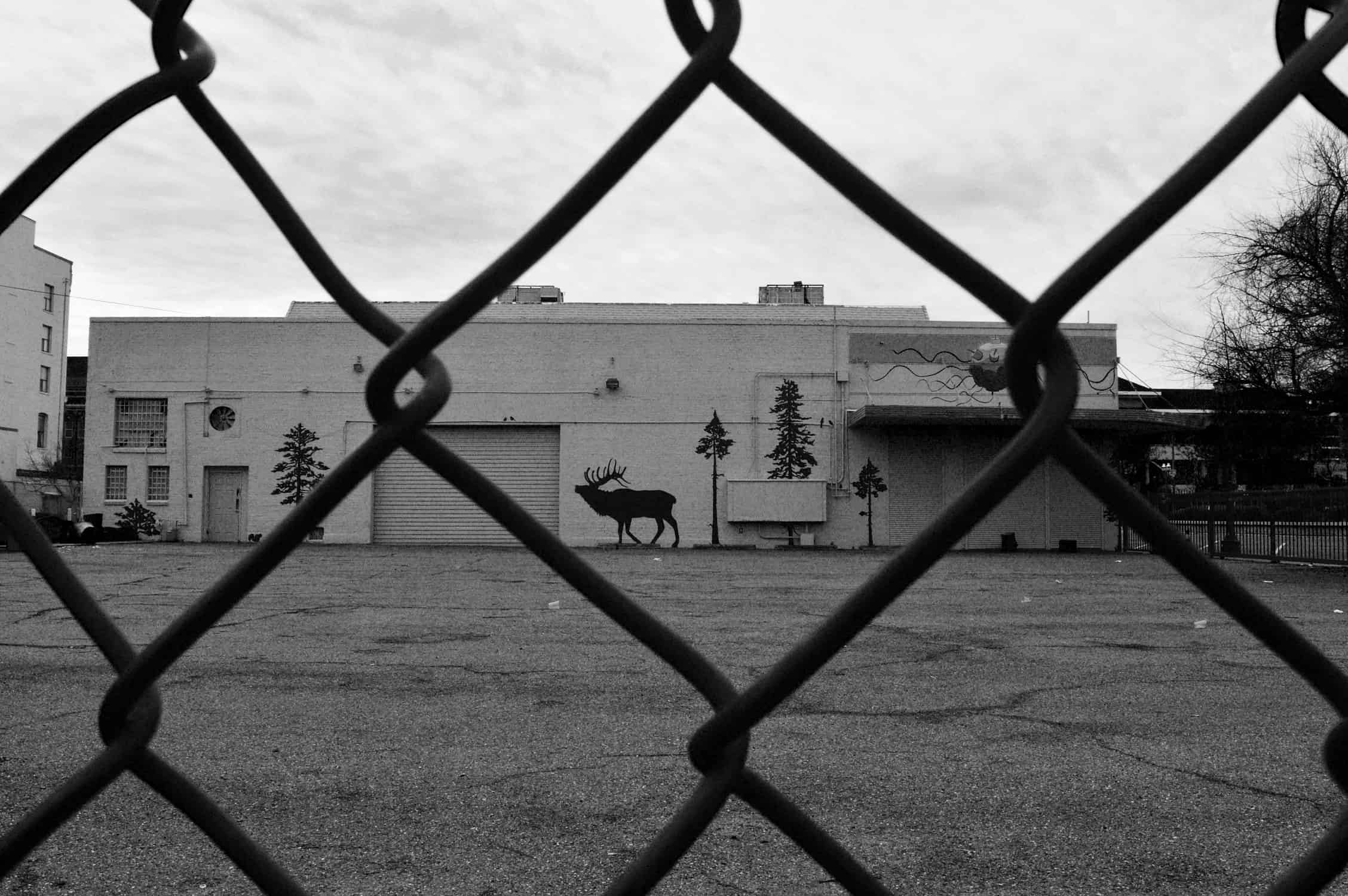 The old Plea For Peace Center, where countless music shows were held, was turned into The Sycamore, “the central valley’s premier event space” that costs a pretty penny to rent.

When taking a drag of a cigarette, occasionally a person tends to experience a slight sensation of lightheadedness and euphoria; it’s the nicotine releasing chemicals into the receptors of the brain, keeping their anxiety from getting the best of them. Tim Egkan’s arrival on the scene was like a wave of nicotine hitting the synapses of Stockton’s local collective conscience—Tim came to us, the young artists of Stockton, and told us that downtown was the future.

Some of us at first were skeptical. The recession had made most of us doubtful and unwilling to accept any form of change, positive or negative. And the fact that Tim was an outsider who was offering us, young people, a voice and various platforms to share our voices, seemed too good to be true. These platforms such as Huddle and The 207 involved young people in community events like Stockmarket, and all of this was supposed to help young artists be seen and heard? It was unbelievable at the time.

But he was Tim Egkan, and Tim Egkan understood what it was like to be young and a dreamer. 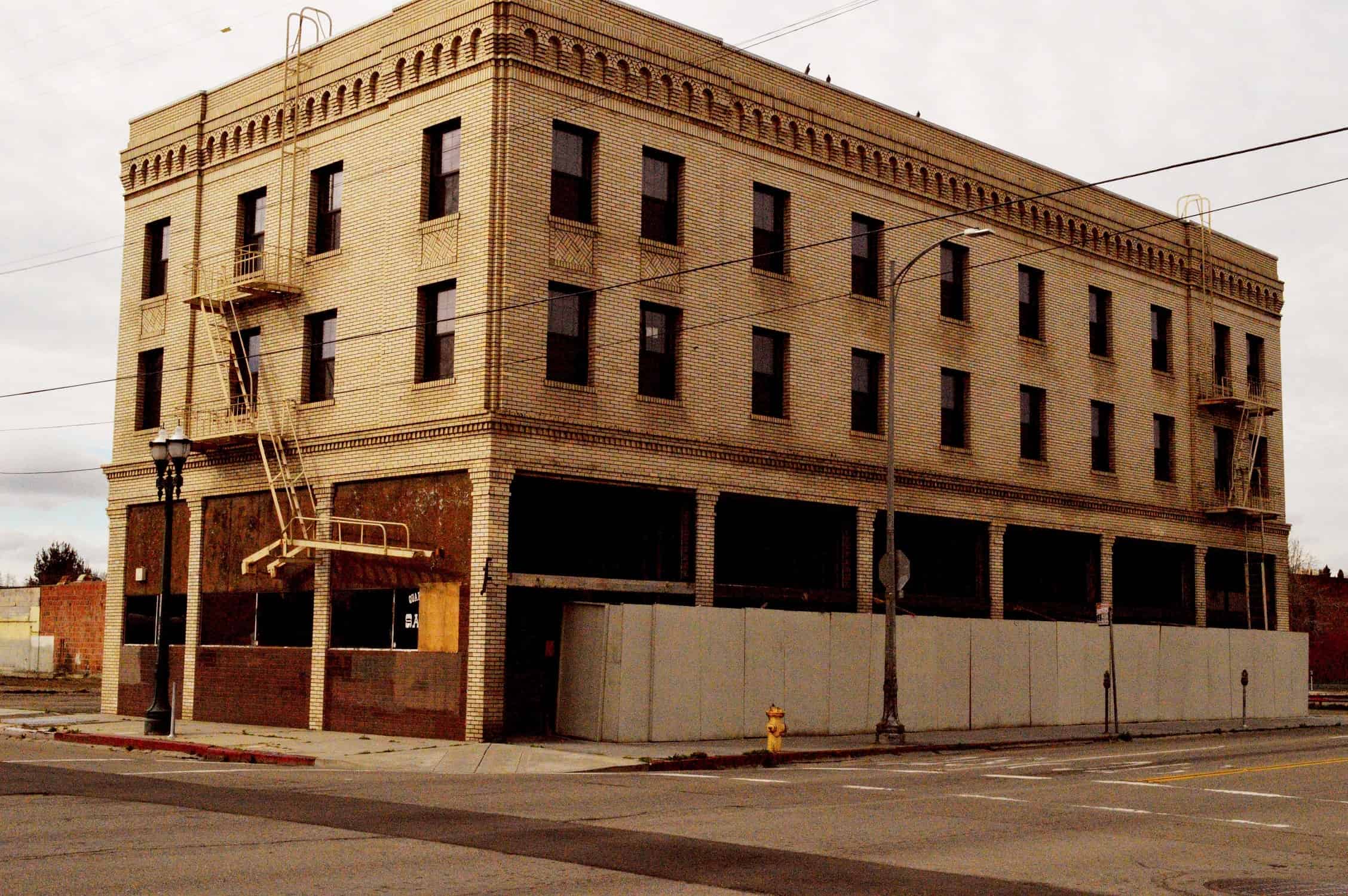 The short-lived music venue, The 207.

The 207 was a music venue that was located at 207 California Street, across from the DTC (Downtown Transit Center). Its location seemed to be more like the setting of a horror movie than a venue; it boasted hardwood floors, a ceiling that was falling apart, a busted front door—the glass on the door was covered with paper and plastic tarp, so if you wanted to get in, you had to enter from the back. Despite its flaws, however, The 207’s bathroom was—by some miracle—still in great shape, and bands were still down to show up and play in the abandoned commercial space. Tim allowed young artist Garrett Compton Daniels full use of the location for both art and music purposes, so long as he covered the utility costs and insurance. At one point, The 207 became the only all-ages/open music venue in the city.

Tim also lent a helping hand in the early days of Stockmarket; back then, the Stockmarket was located on the corner of Weber and Stanislaus. The location of the street fair was also the location of the local music venue, The Plea For Peace Center, one of the first venues where I got to perform in front of a crowd. But the broken stage had been taken out, and the crowd taken with it. The walls were knocked down and the building was repainted. These renovations created a vibe that was more liberating compared to that of the tightly packed shows that had taken place years before. People were excited to be there, checking out all the crafts from local small business owners who didn’t have storefronts or offices, just ingenuity and simple aspirations.

I still believe that the man that was only trying to save Stockton from itself, from it’s problems … but was unfairly consumed by it.

Stockmarket had residual effects on all the local businesses downtown. People started coming into the shops again, storefronts and empty buildings started to be bought and renovated. Even the county government started allocating more resources into beautifying downtown by building a new county courthouse and new county office buildings. Weber started to modernize and the people were starting to see Tim’s vision of what the city could be. We all believed in his vision because it was inclusive: everyone played a role and nobody felt that they were given a small part.

Sometimes, I think about how they found him. His body clutching his stomach from immense pain, close to a fetal position, breathing his last gasps of air. Tim brought happiness, joy, and hope to everyone around him. He didn’t want us to give up on our city, and he didn’t want us to give up on ourselves; I still believe that the man that was only trying to save Stockton from itself, from it’s problems. He tried to bring back whatever life was left in downtown, but was unfairly consumed by it.

I remember the sunken faces, the flames of spirits snuffed out by our own little clouds of darkness and despair in the aftermath of Tim’s passing. The bigger the cloud, the stronger the bond the person had to him, but we all felt the weight of his death. A mural was dedicated to Tim, a painting of an elephant holding a mouse with his snout. Close to a year after his death, the building it was painted on was torn down.

In the wake of all of this, downtown’s development seemed to stall, maintaining its undesirable reputation: The 207 closed down. Weber’s Point host festivals from time to time, but Downtown Stockton seems to remain as stagnant as some of the politicians preventing businesses from investing there. People still don’t walk around at night. However, The Stockton Record, the city’s newspaper, is still active and printing issues. The Cort Group renovated some of the older downtown buildings. Businesses like Trail Coffee Roasters and Cast Iron Trading Co. recently opened shop, and it’s developments like these that revive those old hopes of expansion and revitalization for our downtown. 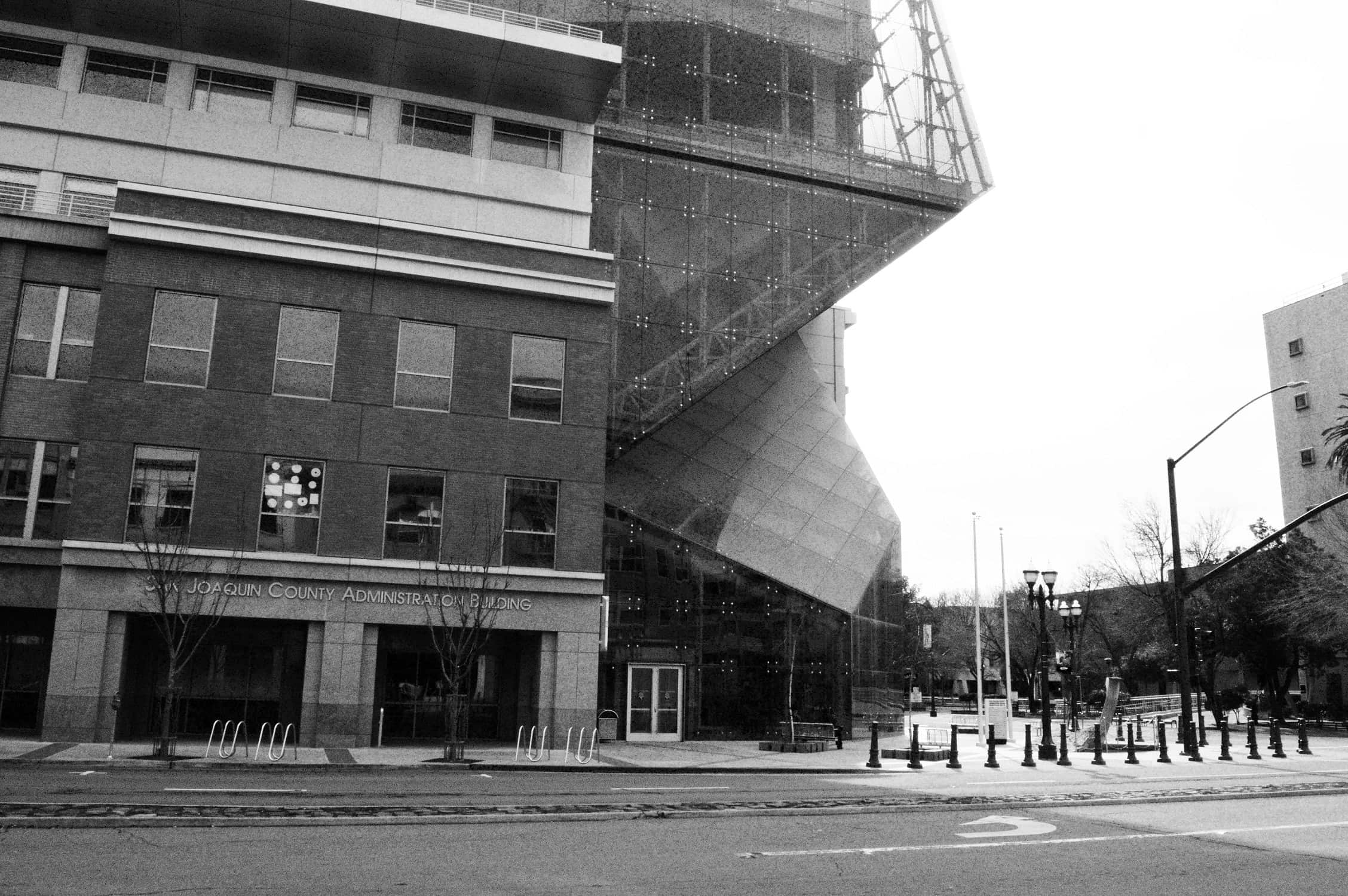 The County building features a sleek, modern look that acknowledges Stockton’s past and provides a glimpse to its future.

But such expansion may come at a price. Like many city-dwellers, “gentrification” is a word I fear. I don’t like the idea of people being pushed out of their homes and neighborhoods even if it is for the good of the community. Redevelopment in Downtown Stockton has been welcomed both by the government and its residents. Weber Street is not the Weber Street that I remember from high school; it now sports new modern buildings that look sleek and refined. Schools are popping up around the area. People who lived in the city before and moved away are now coming back and raising their families, which is both surprising and scary. Downtown is slowly losing the grit and edge that most Stocktonians are used to, slowly being replaced by new buildings and new faces bringing fresh ideas to the polished tables within.

With all the new changes, our city’s addictive qualities seem to take a stronger hold on us all; all those who leave can’t seem to help but come back. As with smoking, the city has shown itself to be bad for us and our health. But what’s one more drag? What’s one more day in Stockton, one more night walking downtown? We’ve lived this long.

Geovanie Brooks is a local photographer, musician, and filmmaker. He is a recent graduate from California State University Sacramento with his Bachelor’s in Film and has been a Stockton resident for over a decade. He is also a member of the Morlocks Underground, a music collective based out of the Central Valley.