California’s housing crisis is leaving local government officials in a tough situation. For one of the hardest hit cities in the housing market crash, Stockton, Calif., the sense of urgency that has been building over the last two years has left residents facing higher rents and city officials scrambling to implement solutions. The City is required to develop 4,400 units in the downtown and greater downtown areas, and 14,000 units elsewhere, within the 2007 city limits. No doubt, that is a lofty challenge.

To begin satisfying this requirement, the City of Stockton adopted the Downtown Infrastructure Infill Incentive Program (DIIIP) on July 7, 2015, encouraging infill development within the eastern core of its downtown. The goal? To support business expansion, bring private investment to the area, and generate additional jobs and revenue for the city. Specifically, the program would provide financial incentives to eligible parties looking to develop new market-rate residential or mixed use projects in Downtown Stockton.

The money could be used to fund public offsite infrastructure—from street improvements, like bike lanes, road striping, and crosswalks; to public signage, landscaping, or parklets—associated with eligible infill projects within the designated program boundaries. 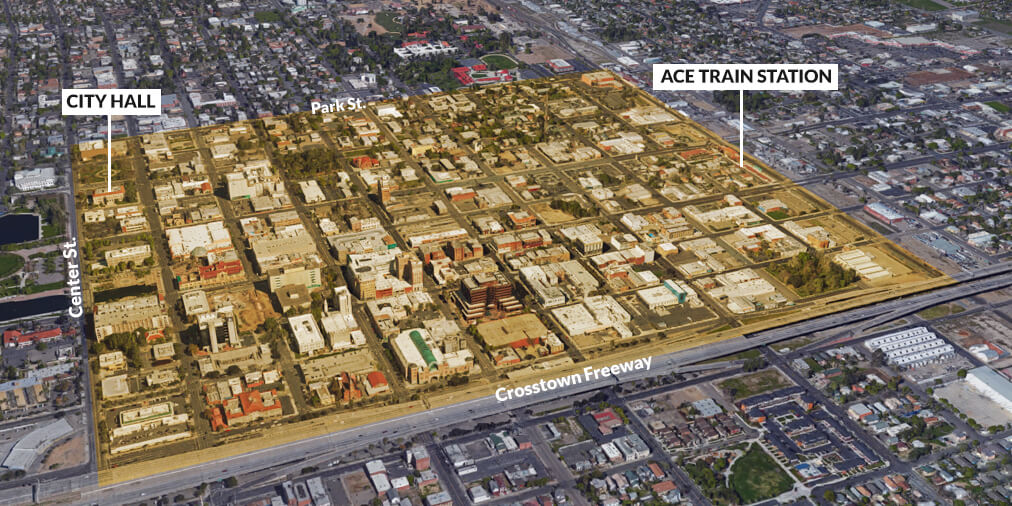 Stockton seeded the program with $900,000 from the current fiscal year budget (2015-16) to establish the fund and send a signal to developers that they were open for business. The funding sources for future years would “potentially be funded” through a hodgepodge of sources.

However, there were a few requirements.

The project had to consist of a minimum of 35 new market-rate residential units and/or a minimum of 30,000 square feet of new or newly renovated retail or commercial space within the designated boundaries. In addition, the applicant must have also made a capital investment of no less than $500,000, and the public improvement project costs must have totaled at least $100,000 to qualify.

The disbursement process for the grant was to be on a reimbursement basis, requiring interested parties to create a Downtown Infrastructure Infill Incentive Reimbursement Agreement (DIIIRA) that would detail the public improvements, cost, source of funds, and terms of the reimbursement.

On Feb. 23, 2016, the City of Stockton approved a master development plan for Open Window Project, LLC (OWP), an ambitious land use plan that would bring over 1,000 housing units to the downtown area. The project passed through the city council with unanimous support.

To the lone community member who spoke up at the public meeting addressing concerns of access, the developer stated that inclusionary housing was a priority that was taken very seriously by the firm. At the same meeting, the City waived the need for the developer to conduct a detailed review of environmental effects due to construction.

Not much information aside from this video can be found on the developer’s website.

Eight months later, on Oct. 18, 2016, the City approved its first DIIIRA with the developer, OWP. The full agreement can be found here.

The highlights from the resolution passed that evening:

Earlier this year, on May 9, the City approved an amendment to the DIIIRA, releasing a prepayment of the reimbursement to the developer “without the developer first obtaining building permits.” In return, the developer put up seven properties until the debt cleared. The properties? Three car lots, two decaying warehouses, and two dirt lots where a 125-year-old house stood less than two years ago.

Some of the properties put on lien by the developer for an advance on the reimbursement.

Now, just five months later, the City is being asked to again, amend the reimbursement agreement, increasing the committed amount from the original $1.8 million to $6.18 million with OWP, due to “significant” changes to the scope of the project. This time, the proposed funding source for the difference being Community Development Block Grant (CDBG) funds that already fall short of meeting local needs.

The proposed changes to the scope include an increase of total units to 261, but also account for a decrease in the number of affordable units to just 30, as well as the addition of one city block. The supplemental information included in the agenda for this evening’s council meeting does not show a new project map with the new Phase I boundaries. The City of Stockton has not yet confirmed whether or not the building permits for either the public infrastructure improvements or Phase I of the project have been issued, or requested, by the developer at this time.

There are many unanswered questions about this ever-changing project.

First, what was the $760,000 prepayment used for, if no permits have been issued to date? What is the true number of units the public can expect the developer to complete in Phase I of this project–how many will be market-rate, how many will be affordable, and isn’t it reasonable to assume that if the number of affordable housing units is decreasing, the City’s commitment should also decrease? The engineer’s estimate shows a doubling of costs for Phase I of the project, yet most of the costs are related to elements of Phase I that have already been predicated–why? Why is the City being asked to remove its only safeguard–the annual budget review process–while increasing the reimbursement by $4.38 million? Finally, and probably most importantly, what is the link between this change in scope and the use of CDBG funds, of which at least 70% must be used for activities that benefit low- and moderate-income persons, when the number of affordable units is decreasing by over 50%?

Stockton native Jasmine Leek returned to her hometown in late 2014 after rising through the management ladder at global communications leader, AT&T. Jasmine believes that the key to healthy cities can be found by promoting the overall vitality and well-being of those living within them. She is a civic activist and Founder/Director of Third City Coalition, a nonprofit initiative focused on increasing civic engagement and promoting new urbanism in cities like Stockton.