With this year’s Global Climate Action Summit happening in San Francisco, it is crucial that California take the lead in envisioning new solutions that are not rooted in capitalism and colonialism. Late last year, America’s Pledge was unveiled at the COP23 international climate talks in Bonn, Germany. Led by former New York mayor Michael Bloomberg and Governor Jerry Brown of California, the group purports to hold the country accountable to its emissions targets regardless of federal inaction. While the America’s Pledge group, which plays a role in organizing the Summit, position themselves as opposed to the Trump administration, I have to ask: is this what resistance looks like?

If we are to enable real climate action, there must be a deep awareness around the roles of capitalism and colonialism maintaining the status-quo. Instead, we should move toward genuine solutions for climate justice.

Three years ago, I was in Paris during the COP21 (Conference of Parties) negotiations. The convening resulted in the first globally binding agreement to address anthropogenic climate change. In the main plenary, crowds gathered around speakers naming differing case studies of innovation that countries around the world were making to address the climate crisis. But the speaker that made me pause was California Governor Jerry Brown.

If we are to enable real climate action, there must be a deep awareness around the roles of capitalism and colonialism maintaining the status-quo.

While he spoke about the need to keep global temperature rise below 2 degrees, the largest natural gas leak in US history was underway in California. 100,000 metric tons of methane spewed from the Aliso Canyon storage facility into the San Fernando Valley, the equivalent of nearly 600,000 cars on the road a year. Thousands were forced to evacuate from their homes. The health impacts are staggering and continue to be documented to this day, including cancer. Kathleen Brown, the governor’s sister, remains on the board of the facility’s parent company, Sempra Energy- which some propose is a clear conflict of interest and a reason why it still remains open today.

This is only one example of many in a glaring record for the celebrated governor in “climate championship” that includes environmental racism in cap and trade programs, pocketing money from agribusiness billionaires to suck the rivers of the San Francisco Bay dry, and continuing to approve offshore drilling on California’s coasts. When Governor Brown receives $9.8 million from the fossil fuel industry and receives praise for his policies from the same forces he pledges to fight against, there is an undeniable takeaway to be seen here: he is a climate capitalist saying the right things but making money for doing the wrong ones, under the table. 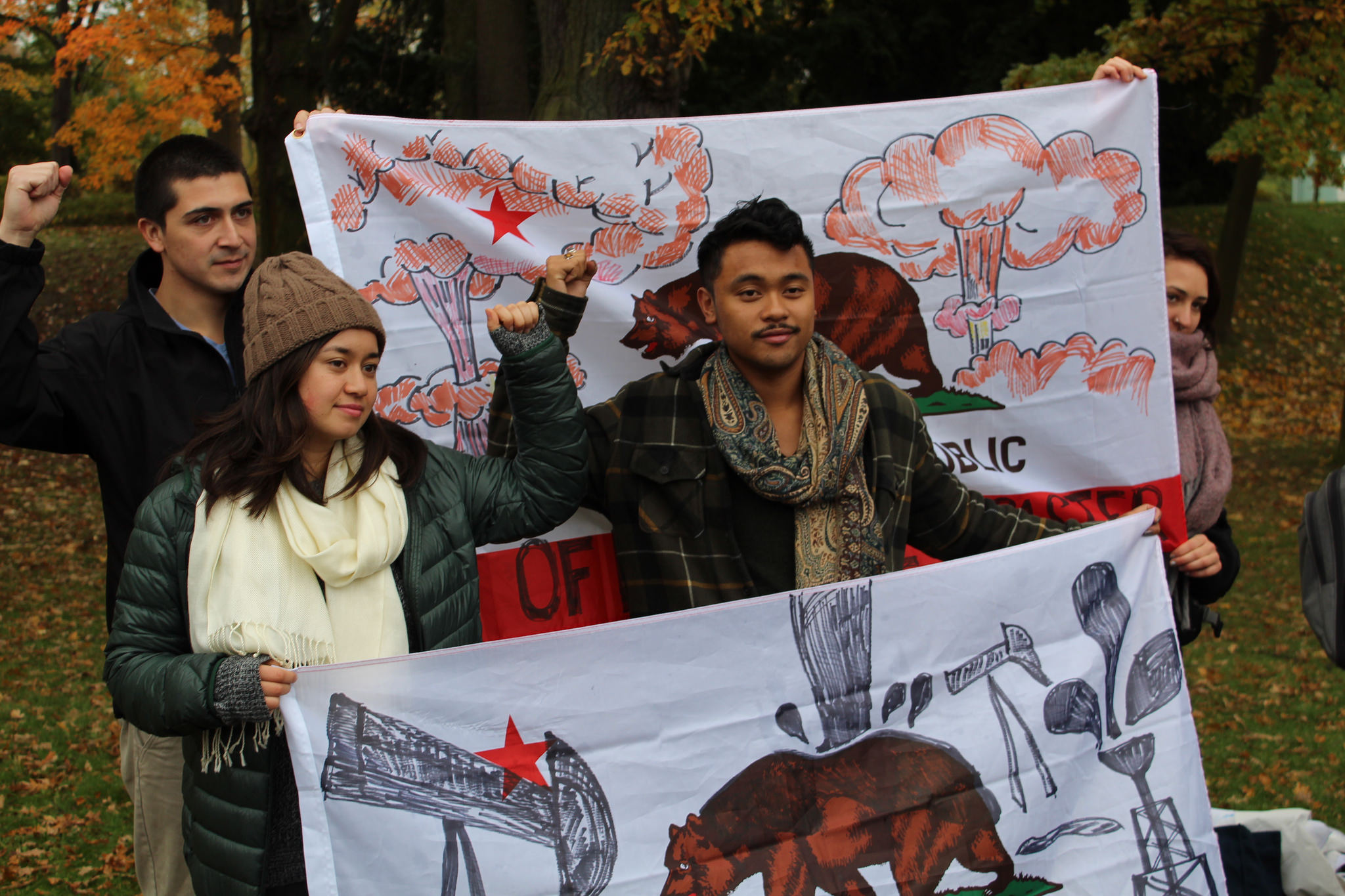 Still In for What?

I could feel myself swelling with anger at the hypocrisy, getting red as Governor Brown spoke; this time, at COP23 in Germany, the first U.N. climate talks since Trump took office. The U.S. Climate Action Pavilion, in which the America’s Pledge launch event was held, was a red, blue and white conference center filled with people desperately desiring for a solution away from our modern, political American Nightmare. The words We Are Still In adorned tote bags and pins that were handed out, meant to be an affirmation that the United States remained committed to the Paris Agreement. I understood the dread of Trump, and the need to fight back, to come together, to mobilize a resistance.

But what are we still in for?

Governor Brown said of the America’s Pledge that it is “a pledge you can cash.” When we look at the Governor’s track record on climate, one that allows capitalism to continue exploiting limited resources, it’s clear that this pledge falls short of what is needed to solve our crises. One of the most esteemed speakers of this event was Laura Phillips, Senior VP of Sustainability at Wal-Mart, a multinational corporation that is widely known for moving jobs offshore and inflicting massive damage to local economies like Stockton’s. The dissonance of seeing this corporation paraded as a leader despite its devastating impacts to communities was astounding. 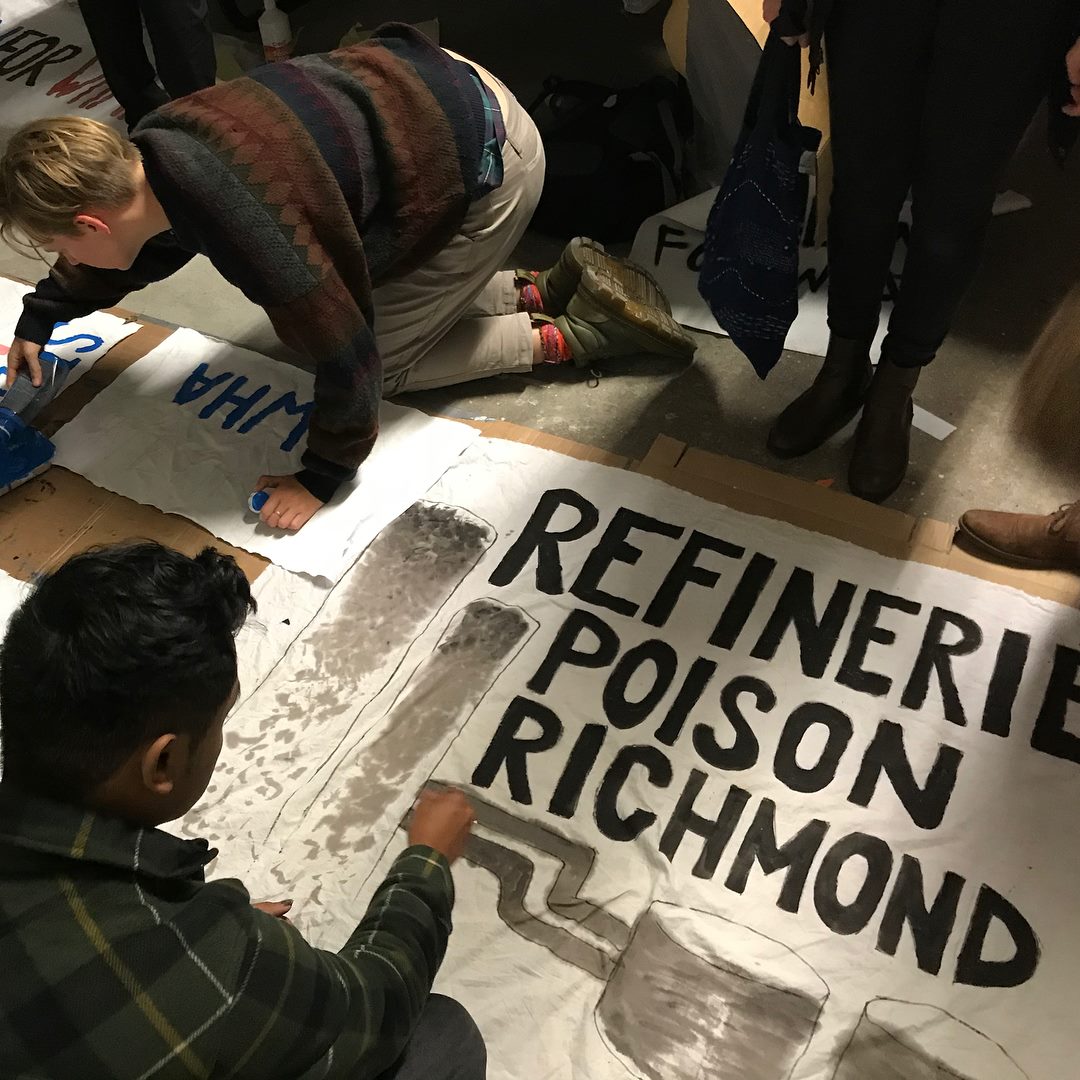 Governor Brown declared that “when cities and states join with powerful corporations, that’s when we can get stuff done.” In a political climate that feels like the federal administration has merged with the brand of Trump®, I wondered then if the America’s Pledge was pouring our hopes into another private-sector, corporate colonization. What keeps corporations accountable and altruistic, especially since we have seen that large ones never have been before?

We interrupted his address to speak for climate justice, chanting “keep it in the ground” to ensure fossil fuels stay in the soil and named real examples of communities like the refineries in Richmond affected by the governor’s neglect. Brown revealed for himself his true colors in saying to frontline community members and indigenous activists, “Let’s put you in the ground so we can get along with the show here.”

America’s Pledge seems to be another brand of more palatable ‘progress’ that folds into the same systems erasing the struggles of indigenous peoples, those impacted on the frontlines and communities of color that, through lived experience, simply cannot see Brown as a climate champion.

The condescension did not stop. As we walked out, the majority of the audience drowned the center with “WE ARE STILL IN! WE ARE STILL IN!,” a demonizing feeling washing over us as the dissenters were painted as just making noise. Governor Brown directly responded to our action as we left, saying, “I think we are gonna need a little more intellectual content than repeating a slogan.” Yet to be honest, there were never any real opportunities for dialogue, and I’m not quite sure there ever was a chance for one.

The conclusion I gathered was: We Are Still In for capitalism and colonialism.

We Are Still In This Story

In September, leaders from around the world will meet in San Francisco for Governor Brown’s Global Climate Action Summit. Meanwhile, a coalition of over 750 environmental and grassroots organizations have launched the Brown’s Last Chance campaign, in an effort to ensure California leads the nation in ushering the end of fossil fuels. Will the governor listen to the demands of the communities he represents, or greenwash over them with an illusion of hollow climate leadership for the world to follow suit?

Holding people in positions of power accountable and conscious of the systems of capitalism and colonialism is crucial for genuine solutions that transcend the status quo. The We Are Still In coalition remains entrenched in the systems of oppression that enabled Trump to take power. The quicker we get to naming that, the sooner the nuanced change the world needs to solve the complex crisis can happen. For all of us that see it. The marginalized, impoverished, disenfranchised, the indigenous, and those of color are still in this story for climate justice and our stories are necessary to consider in the fight for collective liberation.

In actuality, we have to take a step further and center the voices of those most impacted, and channel power to the grassroots to make societal decisions about our futures informed by the people’s consensus, not elites. Corporations blind to their own crimes cannot be the heroes to solve others. Governor Brown says his coalition is not going anywhere– and neither are those who are morally compelled to name what is wrong, even at risk of being one-dimensionalized as just “noise.”

There is no we without us. And we are still in this story, even if you try to put us in the ground to forget our struggle. 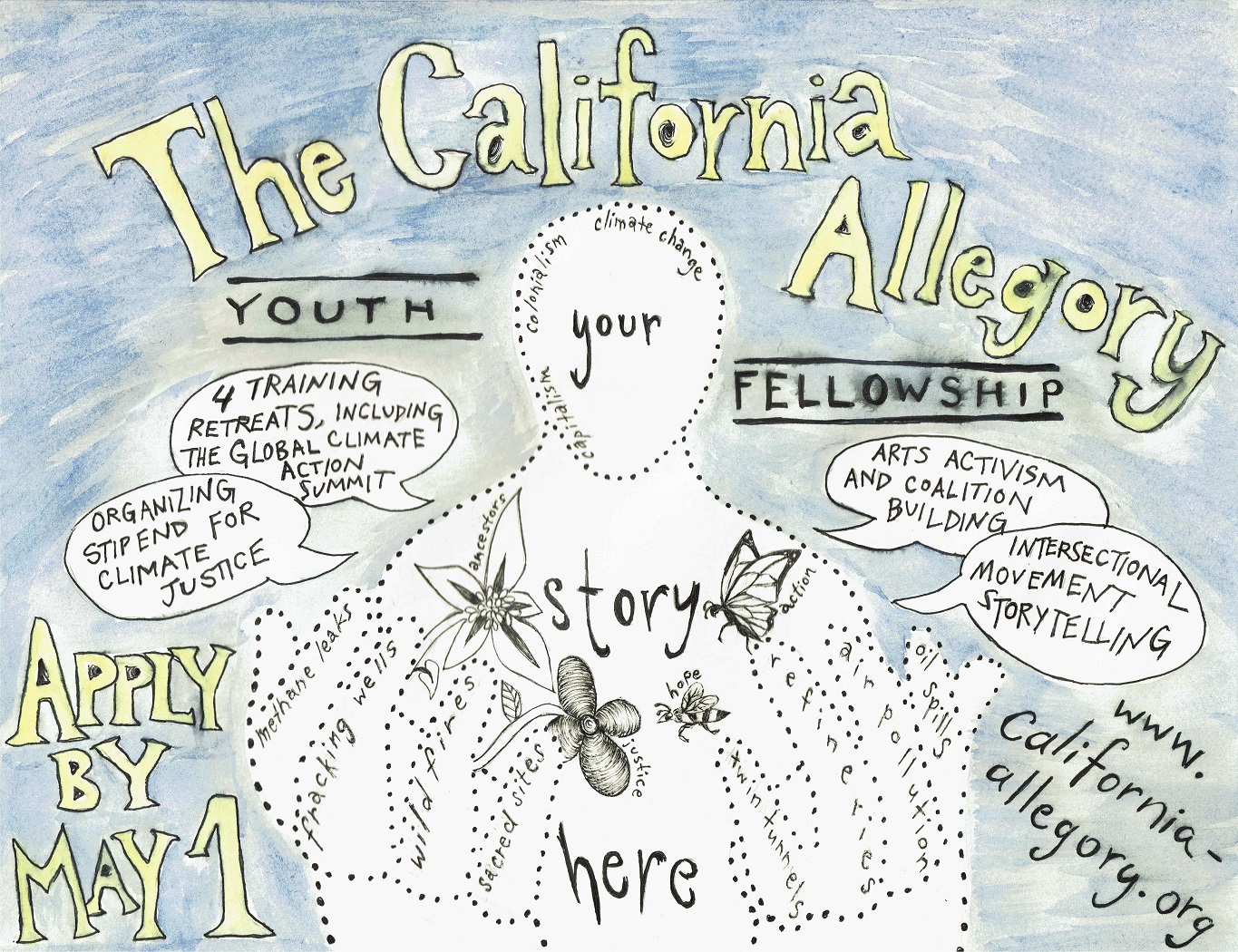 Ryan Camero is a queer arts activist who works on climate issues and inter-sectional justice. He likes singing, being creative and playful, and exploring through experiment. He is currently a 2017 Spiritual Ecology Fellow and one of the organizers of the California Allegory Youth Fellowship.