A few weeks ago I had the chance to visit Beerwine King at their practice space in Oakland. The psychedelic alt-rock band consists of TJ Gardea, Michael Gallagher, and Jake Turner. Growing up in Stockton, they have been playing on and off in different bands since they were teenagers. They moved to Oakland like many kids from the Central Valley who feel like there’s more opportunity in the Bay Area.

I took the BART to the West Oakland stop where Michael picked me up. As we met up with TJ and Jake at the practice space, we all chatted a bit about walking around Oakland at night and the high cost of living in the Bay Area.

Beerwine King recently released their first full-length album, Treason, recorded with Ben Hirschfield at Nutone Studios in Pittsburg, California. I asked them what their thoughts were on the release so far. TJ Gardea, who plays drums, guitar, and sings for the band, answered, “Well we’ve had it for awhile so we’ve listened to it so much, but overall I guess we just wanted to get something done.” 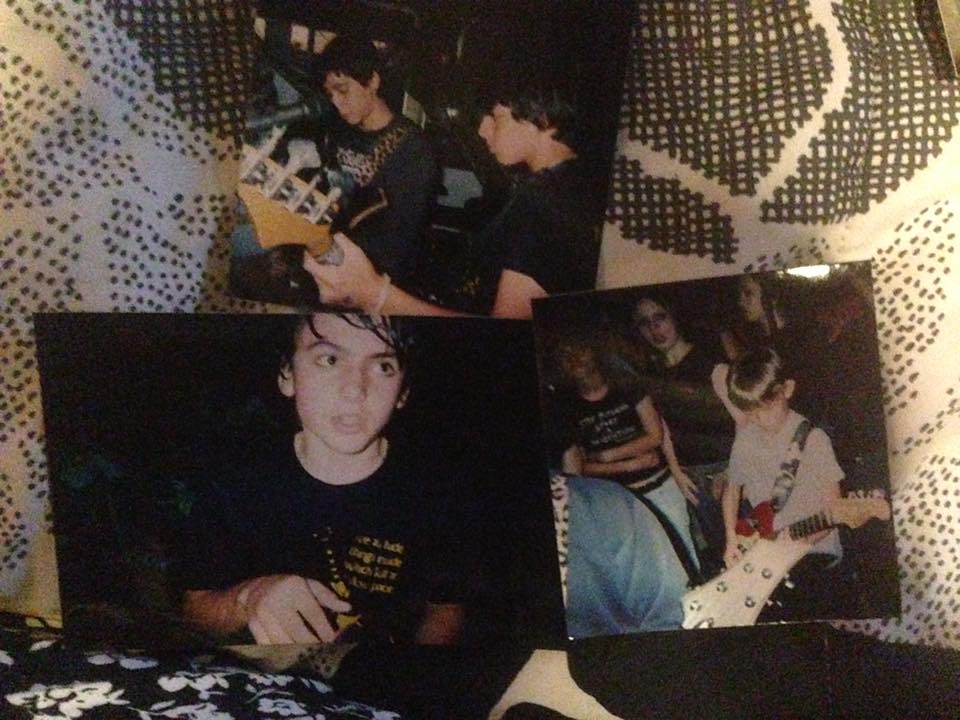 Michael and Jake playing when they were in their early teens.

TJ went on to tell me that Beerwine King has been a band for five years. “We recorded a demo but working with Ben was different.”

Michael chimed in, “Yeah, this is our third CD, technically, because we had a homemade demo we DIY recorded. Then we had a pressed one our friend Alex recorded that was a 6 song EP. Now this release is 9 songs, and full-on studio recorded, with better production.” Michael pointed out that this release “captures what the band sounds like.” They were proud to say that it was more true to their live sound. They plan to release this new album on cassette tape as well as digitally through Spotify, Soundcloud, and other streaming platforms.

“I think our goal with this album was to make something that looked nice, was very well produced, but was still very much us.” Michael stated the band hopes this release will help them get recognized by blogs or other websites that share and promote music. TJ added that they want the band to be taken seriously. At first listen of their new record, you can hear the production quality that they speak of, while still maintaining the sound that makes them unique.

“We just wanted to get it out. At the end of the day, you just want people to hear it.” - Michael

Beerwine King playing at the Harm(onic) Reduction Festival in Oakland with headliner Del The Funky Homosapien.

When asked about his thoughts on the album, Michael stated, “Everyone likes Jake’s songs because his voice is really good.” He was right; one of the stand out tracks on this album is Jake’s song “Dusty Valley.” As a native of the Stockton area, I was immediately drawn to this song when they posted it on the band’s SoundCloud.

Jake humbly brushed off the praise, “I guess everyone is their own harshest critic, so I like TJ’s songs better than my own.” Although he struggles with that familiar self-doubt that all artists can relate to, he admitted that he was really happy with how the recordings came out.

When asked about the meaning behind “Dusty Valley,” Jake said, “It’s definitely about a time and a place; I don’t really identify with where I was at 19, anymore.” Citing his age when he originally wrote the song, he went on to talk about a feeling I think many ex-Stocktonians can agree with. “I used to have a lot of angst about the town that I grew up in, but now I feel a lot better about that place, and I actually love that town now.”

After chatting with the band about Jake’s song, I had to clarify their ability to switch instruments within the band. I told them the instrumentation on their recordings meshed together so well, the only changes I could hear were the vocalist changes. The band explained that on Jake’s songs TJ would play drums, while Jake played guitar and sang, but for TJ’s songs it was the opposite. I went on to compliment them on how well the band is able to rotate instruments while still sounding like a cohesive group. To that, TJ and Jake told me that the band has been playing together for almost eight years now, that they started playing together when they all individually moved out to Oakland from Stockton.

While listening to Treason, I noticed how well all of the songs flowed together while each being unique in their own way. In addition to “Dusty Valley,” the song “Wolf” stood out to me as a must listen. The song breaks away from the rest of the album into a sludge-filled hardcore-influenced song, while still maintaining the band’s own unique charm. When I asked the band about this particular track, they told me they set out to write a punk song, but it is a favorite to perform live. TJ said he was listening to a lot of black metal which influenced him when writing the main riff of the song. “Punk rock is something that is always going to stick with our band,” said Michael.

After chatting a bit about their songs, I asked the band to talk a little bit about being musicians from Stockton now living and performing in Oakland. The band unanimously agreed that the scene in Oakland always feels alive. Michael stated, “I guarantee you I can walk down the street in Oakland tonight and find a show to go to.” They touched on the community of artists in Oakland that is the driving force behind the lively music scene. In contrast, they said that Stockton is a little more mellow, and felt like there are really good artists there but there is less communication within the scene. Michael continued, “People here go out more in general, where here you can walk to bars, but in Stockton you have to drive kinda far everywhere.” 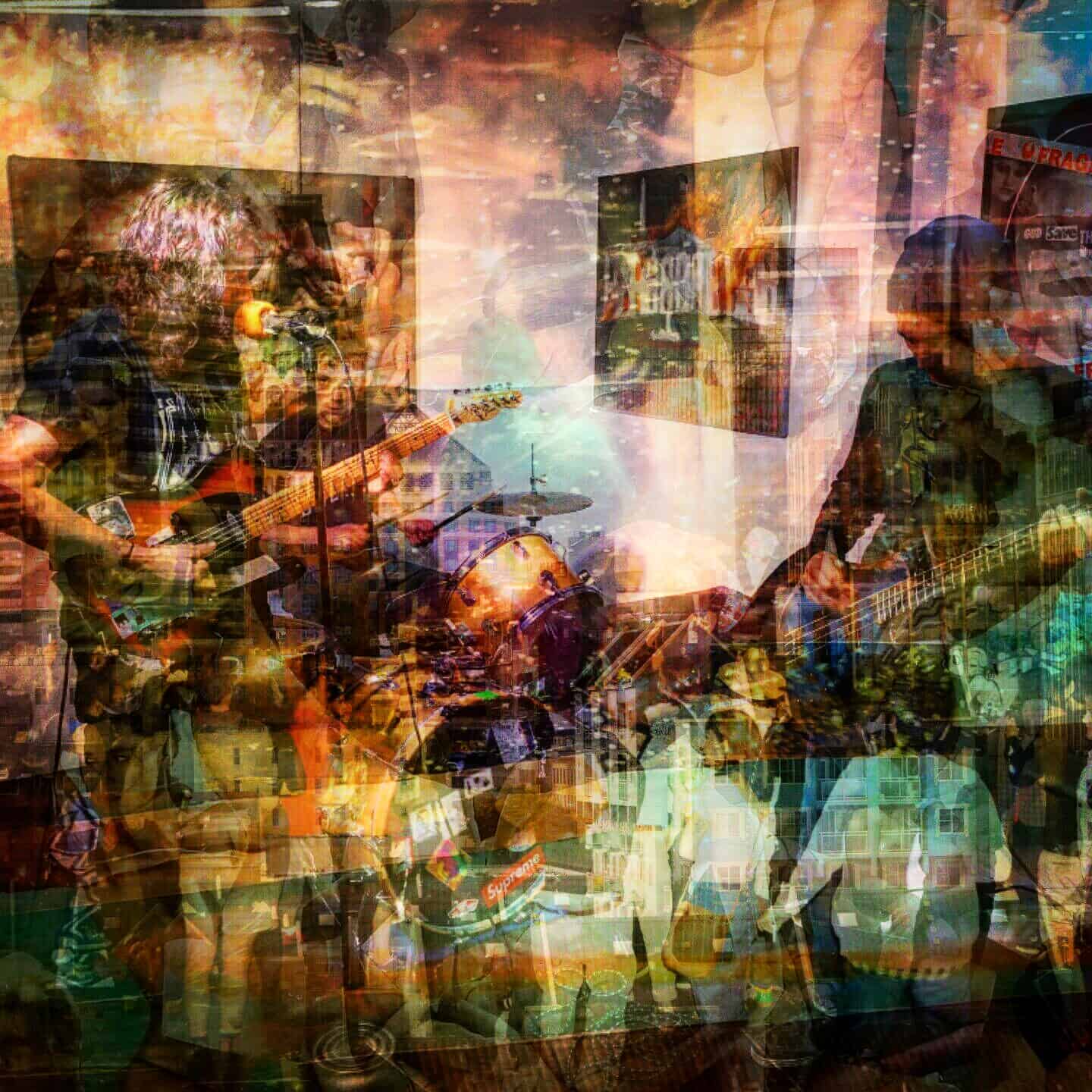 “We still love playing shows there [Stockton]. We recently played at the Cast Iron; there was hella kids there, it was dope,” said Michael.

“Yeah it was fun, it was like an old Blackwater show or something,” said TJ.

“One of the things I really love about Stockton is younger kids still go to shows there, while in Oakland there’s hella bar shows,” said Michael.

Before Michael gave me a ride back to the BART Station, he talked a little more about the cohesiveness of the band. “I think one of the most important elements in our band is that fact that we’re hella good friends. Our music is bonded together by our familiarity; like when we jam, I feel like we can communicate telepathically.” It’s obvious to me that the bond they have helps them write and perform great songs, and they maintain chemistry even when swapping instruments. I have always been a fan of the music these guys have made, but I’m especially excited about their new release. What’s next in store for Beerwine King? They mentioned their desire to tour, and a chance to take the new album on the road.

You can listen to Beerwine King’s new album, Treason, on Spotify & Soundcloud.

Raised in Stockton and currently living in the Bay Area, Andrew Hemans is an occasional contributor and the Design lead for Placeholder Magazine. He loves all things design, including coding this website and he also makes music for his band Los Beekeepers.