I awoke in drum-tight skin. My room, brimming with soft morning light, was in disarray. Most of my possessions sat in piles between my desk and bed, a few long sheets of carpenter’s paper thumbtacked to the wall acted as decoration. Scattered across them were ink drawings, sentences I had read, phone numbers, undecipherable reminders. I was lying in bed, hot, sprawled out and supine on a sweat-soaked mattress, feet where my head should’ve been, brain somewhere near the ceiling fan. I was hovering there, watching myself, unable to move, thinking, “This isn’t so bad.” My toes pulsated tingling waves toward my eye sockets. I was a piping hot liquid; I began to feel myself come to a boil. The dreamlike image of an incubus and succubus materialized atop my blanketed chest. The walls began to bow. I was torn from myself, estranged, drifting further from the territory of my identity. 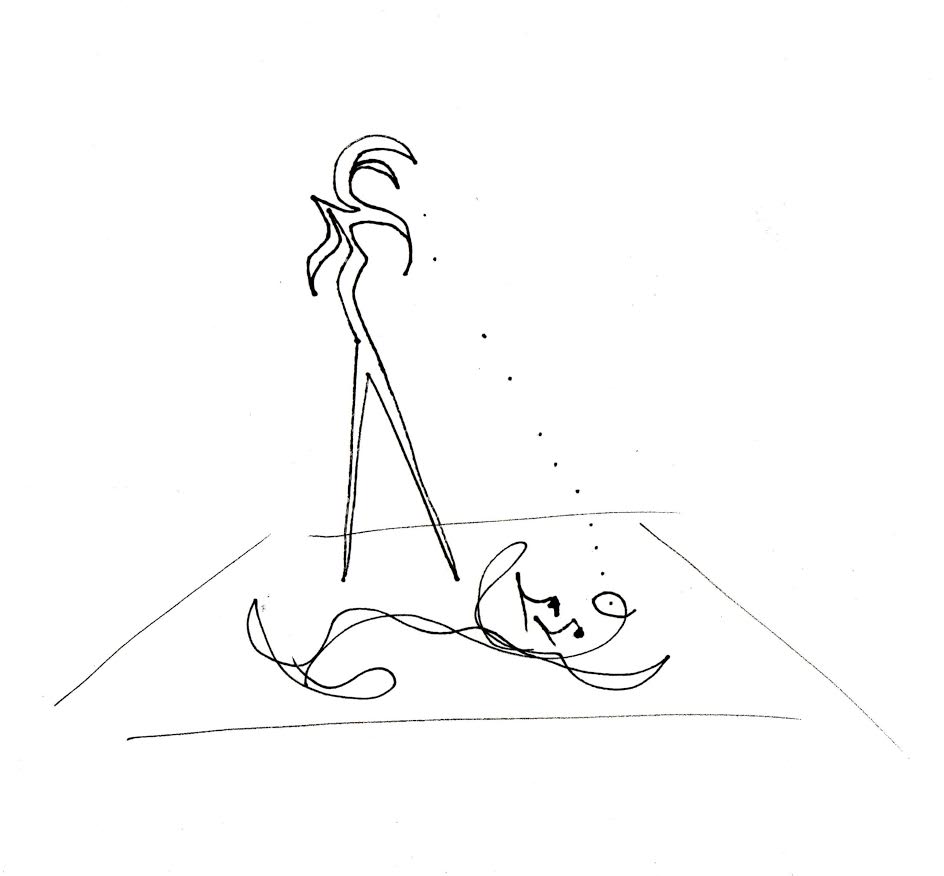 Some article I read online said that postdormital sleep paralysis can occur when someone “passes between stages of wakefulness and sleep” and that the “physical [and hallucinatory] sensations go away within a few minutes.” This was the third consecutive morning it had happened, but on the first two occasions I didn’t visually hallucinate, only auditorily (I heard the screeching of Buer, the great president of Hell). These experiences polarized my previously held conceptions of “mind and body.” I felt not a single mind and body, but a community of minds and bodies.

I found a list of Three Helpful Things to Do When You Start to Panic Because You Are Caught Between Stages of Wakefulness and Sleep:

I was constantly doing those things anyway—sans rule number 2—even before the episodes of disembodiment.

A few minutes (which felt like hours) later, the hallucinations dissolved, my consciousness re-cultivated inside my own head and I could move again. It must have been 100 degrees in that room. I laid there, content with not moving, staring at the eggshell ceiling where I had stapled a 4x5 cutout from Artaud’s play To Have Done with the Judgment of God:

When you will have made him a body without organs,

then you will have delivered him from all his automatic reactions

and restored him to his true freedom.

I sat up and slowly scanned the messy perimeter for my phone, tiny orbs of sweat forming on my brow. It was always a struggle to find anything there—I had a poor habit of tossing personal items, like my phone, for instance, on the floor amidst cans of coconut water, books creased beyond recognition, dead pens, random articles of clothing and piles of other random shit—but, to my surprise, the phone was resting right there next to me. I flipped over onto my chest and began scrolling through the virtual realm. I saw nothing, just shifting zones of self-reference, myriads of colors with varying intensities, lucid projections, profiles, scrolling text, tracings of the other. Without thinking, I threw my phone at the wall. Maybe I just wanted to watch it shatter. It didn’t. Somewhere deep inside I longed to shatter.

In one fluid motion, I shucked off my bed sheet and moved toward the desk set just underneath the northwest window overlooking downtown Chicago. Warmth radiated from the morning sun suspended in a cloudless sky. I stood there for a second with my head stuck out the window. Early risers moved rapidly up and down Harrison Street dressed in heat-appropriate white collar attire, complex swarms of worker bees in flight between home and the hive. My laptop sat on the desk. I caressed its smooth, anthracite-colored, polycarbonate exterior and pressed the power button. The screen illuminated. Google Chrome was open, displaying search results for “Can depression cause sleep paralysis?” I skimmed a few lines of a suggested article: “…someone who is depressed might also experience a loss of interest in things and have issues with sleep.” The article went on: “[the depressed] may object if anyone tries to point out their depression…this is understandable because people experiencing ‘mood swing’ depression at times feel better than they ever have before.” After clicking around online in a confused and scattered attempt to diagnose myself, I noticed heat in the room was becoming unbearable. Instinctually, I closed the open window above me and switched the mini AC unit into “penguin” mode. I decided a short walk outside might feel okay. Even though I didn’t like being outside very much, walks helped clear my head. I would often wander without destination through the city, lost in thought, not entirely aware of my surroundings. Two days ago, after my first Out of Body Experience, I found myself on the floor of the Harold Washington library. I’d passed out in the “Self Help” section.

I grabbed my keys off the floor, quietly shut the front door and began to drift down the horrid brownish-yellow hallway that lead to the south staircase. I lived on the third floor of a trashy apartment building located off South Canal Street. The place was infested with roaches, and God knows what else, but the tenants were quiet, and didn’t seem to mind. I never saw or heard any of them, and that was fine by me—I hadn’t heard anything from anyone in a long time. My only social venues were stages of necessity: the grocery store, library and laundromat. My phone and computer were social observatories, towers of data protected by moat and drawbridge; my kingdom. At that point, even leaving my room felt like a social activity (a tiresome laying down of the “drawbridge”).

Outside, the municipal walkways were teeming with life. The summer sky was a resplendent azure, trees permeated rich wavelengths of green, people smiling, people frowning—lead roles in the city’s production of Summer! I bent to touch the ground with a finger; it felt hot, but I doubted that it was actually there. I began to walk. My terrestrial-self navigated through insouciant crowds of beings and tall brick buildings—my thoughts trailed: I saw troupes of parents, children, friends, animals, all planets within themselves, dancing in synchronization around self-defined axes of instinct. Physical structures, but also structures of abstract ideas and insatiable desires. The mantra “go with the flow” flashed across my mind. We are constantly stuck in flows and modes of desire, we attempt to satisfy them, but we cannot for they are alien to us. 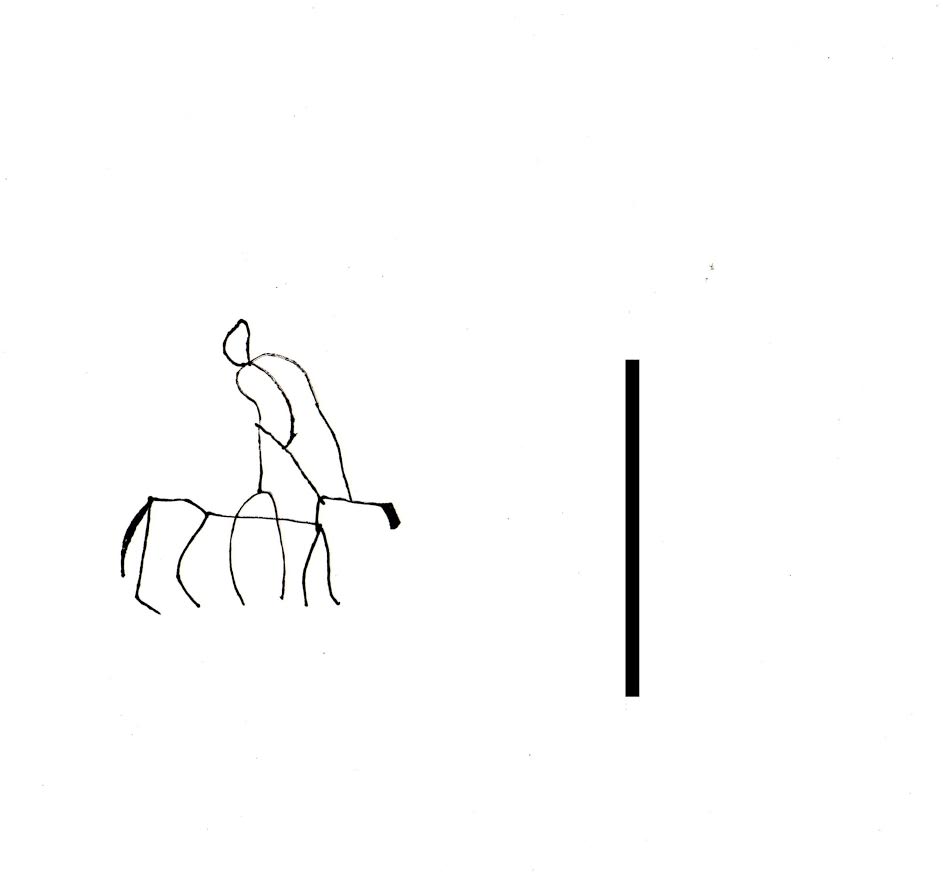 The sun was scorching. My stomach made gaseous rumblings. By that time, I was up on Van Buren walking over the river, near a Greek restaurant. I decided to stop and grab a pint of Tabbouleh, and maybe some falafel. It was a modest place with pictures of the Aegean coast, Santorini and Athens hung on faded turquoise wallpaper—the kinds of images you’d see in YouTube compilations titled “4k HD GREECE”, “24hrs Of Relaxing Chillout Mediterranean”—the white tile floor was bordered with an intricate meandros and a miniature chalkboard leaning on the old-fashioned cash register read: “Pint of Tabbouleh only $3.99!” There was a grey haired older man working behind the counter, possibly the owner, he didn’t try to make conversation, but his blue eyes seemed kind and friendly. I handed him $5 and pointed to the chalkboard. He gave me a cold plastic container from a big glass case behind him. It was filled with colorful salads, stuffed grape leaves, yogurts and the like. Refreshingly, neither of us bothered with the customary verbal niceties. It was almost a completely wordless transaction, but just as I opened the door to leave, I was startled by his deep, coarse voice behind me: “You look unwell, boy. You need some protein.” I left without saying anything.

Did I look that bad? He reminded me of my physical health, my humanness, my body: the parts of me everyone saw. I felt like I was dying. Something within me slowly untangled: I felt a rising pressure over my body, my heart raced and recoiled, my skin felt like it was searing, or maybe it was crawling. Was this a flow? Perhaps it was heat exhaustion or dehydration. My intestines writhed as a sickly flow of paranoia swallowed me, and with it my appetite. I threw away the salad after a few oily handfuls.

I couldn’t help but feel like people were watching me. Cars on the street seemed like metallic beasts! People on the sidewalk were agents of alienation! Sweating profusely under the late morning sun, I could only think of one thing: “projection, projection, projection, this all must be a projection!” I stopped walking across the street from the Desplaines St. Greyhound station underneath the cooling shade of the Eisenhower Expressway. I found comfort in the machinic noise of passing vehicles, an orchestra of engines, an ocean of oscillating particles vibrating with a certain pitch and speed. Intuition, phenomena (sounds of the metallic transportation machines, ghastly internal pangs with no discernible origin, appetite, paranoia, tingling waves, paralysis) and other predetermined facets of our experience, these are the fetters of flows—how exhausting the multitude of flows! How desperately we crave rest—A motorcycle driving under the overpass revved its engine. Gust from the vehicles caused me to sway. I felt an uncontrollable desire to eliminate myself. I wanted to feel myself shatter into pieces. I placed my body in the path of an oncoming Greyhound bus. A deafening horn, screeching rubber, dull seizure of senses. Everything was rotating, blended, blurred. Sensual experience instantly distributed itself into two enormous categories: heat and pressure. I couldn’t breathe. 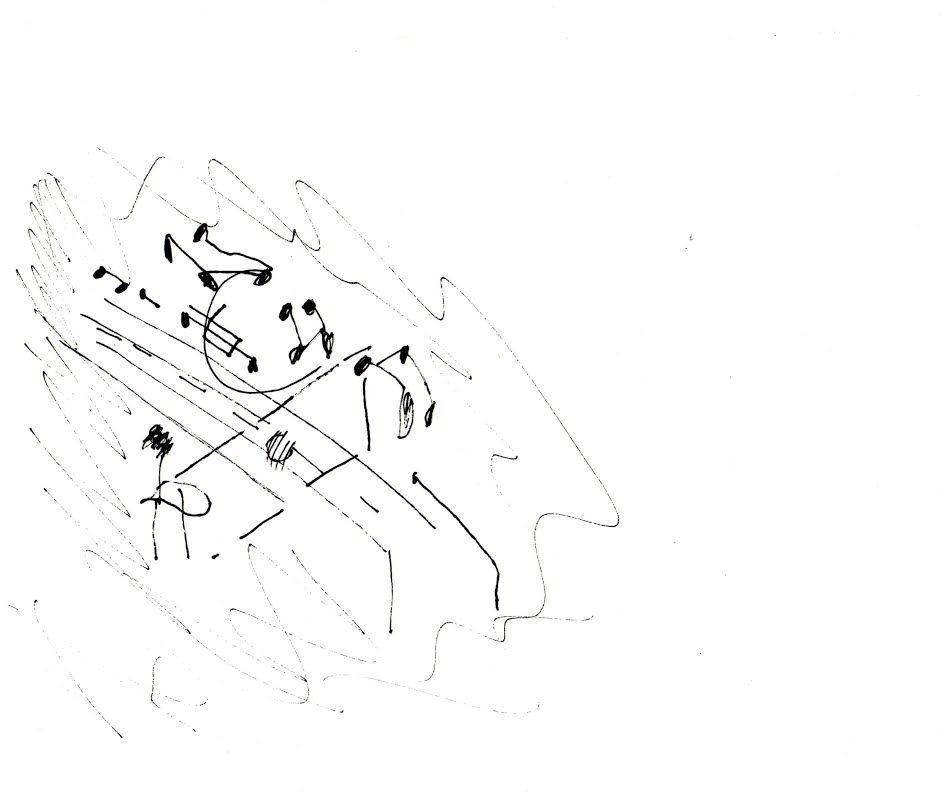 My selves became a host of floating bodies. This was not a shattering into little pieces, this was an elimination of the little pieces (mind, body) and a becoming of many entireties. Things had no variance, the corporeal erased itself, all was but heat, pressure, speed and slowness within the dungeon of the real. 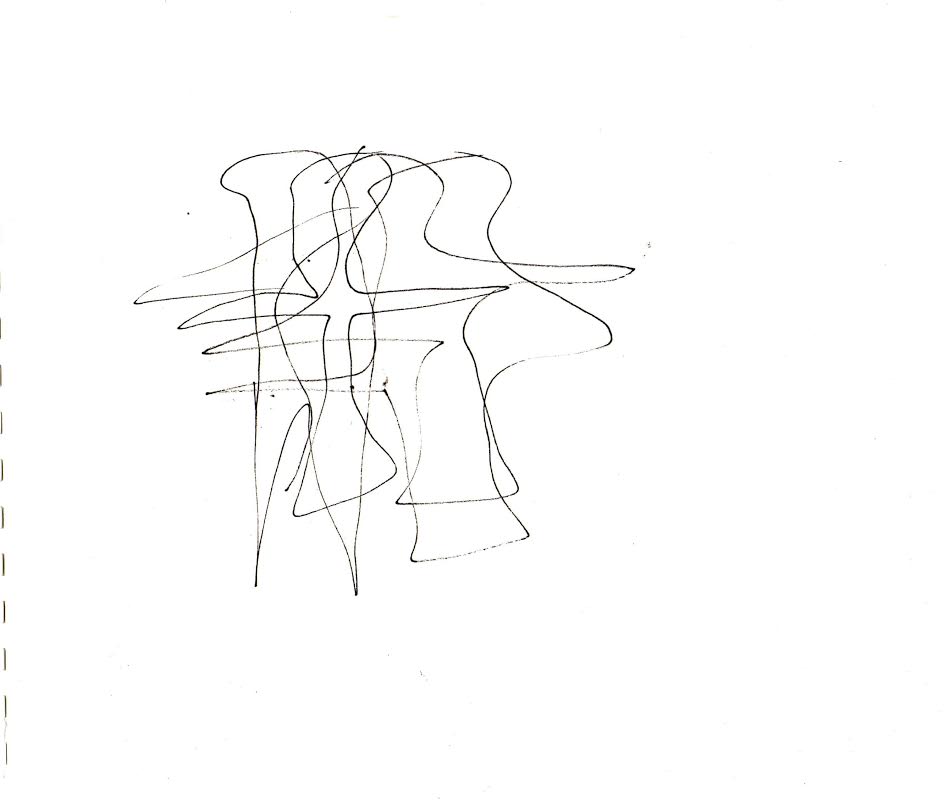