“I’m weak and pathetic,” Penny said. “I went back to the apartment yesterday and tried to get Jack to reconsider us.”

Hands hovering over the keyboard of my computer, my first instinct was to tell her that she wasn’t. It was what a good best friend would say.

I said, “You’re not weak and pathetic. You’re heartbroken.”

Which is basically the same thing.

Penelope’s a curvy brunette with lips the color of summer roses. When she laughs, it’s a full bodied bell being rung over the sound of an Italian wedding. When she smiles, you can hardly see her green eyes over the shine of her teeth, her lips drawn back over them in perfect symmetry, like a burgundy curtain parting over a stage of pearl. When she cries, it’s a soft rush of a sink with bad water pressure. Huffing and puffing and sputtering.

I hate when she cries. I used to not mind it; I thrive off of helping people with their problems, and crying is just part of the gig. But now—three years, four cheats, and six break-ups with the same boyfriend later—I suffer through it.

It’s a sad day when you stop feeling sorry for your friends. It’s also the day when you stop being friends. Maybe not officially, but that’s where the invisible line is drawn. Somehow, all your care for a person’s problems is tied to the core of your friendship, and when the former flutters out the window, the latter follows.

I suppose I’d set a record for how long I’d been able to keep this friendship of ours airborne, despite the fact that it’d been a long time since I’d given a shit. In this metaphor, I was still standing on the sidewalk, neck bent back, face pinched in the sunlight, blowing air against the underbelly of Penny’s Friendship through pursed lips, numb and quivering. Half blind from the sun, I’d see the silhouette of the thing, the deflating balloon, and I’d forget to wonder why I was still doing this, mainly focused on the pain of each individual ray of sunlight like a new dagger in my corneas. Occasionally a cloud might pass over, giving me some respite—it’d be then that I’d remember, stretch my mouth in a few wide O’s, and purse them again to blow like the big, bad, friendly wolf. Why, indeed.

I’d be great at failing marriages. By “great” I mean I wouldn’t leave in the middle to go start up another one—I’d be a regular Catholic with how I’d persevere through the bad sex, the silent dinners, the hateful taste of vinegar on the salads that his mother would insist on bringing us every time she wanted to comment on the state of my kitchen. I’m sure I’d stick it out all the way to the bitter end, when he’d finally limp himself into the middle of the old vineyard with a scuffed pistol in his hand. I’d be out back, feeding the chickens, and it’d be something stupid, like the way that Henrietta’s clucking would be more cluck-y than usual, and I’d find myself wobbling out into the vineyard and see him standing there, still deciding. He’d turn to me, his eyes like sad little clouds hovering over his mouth, a trembling O as he’d try to explain. He wouldn’t have to explain.

Because I’m a nice person. But Penny is nicer. 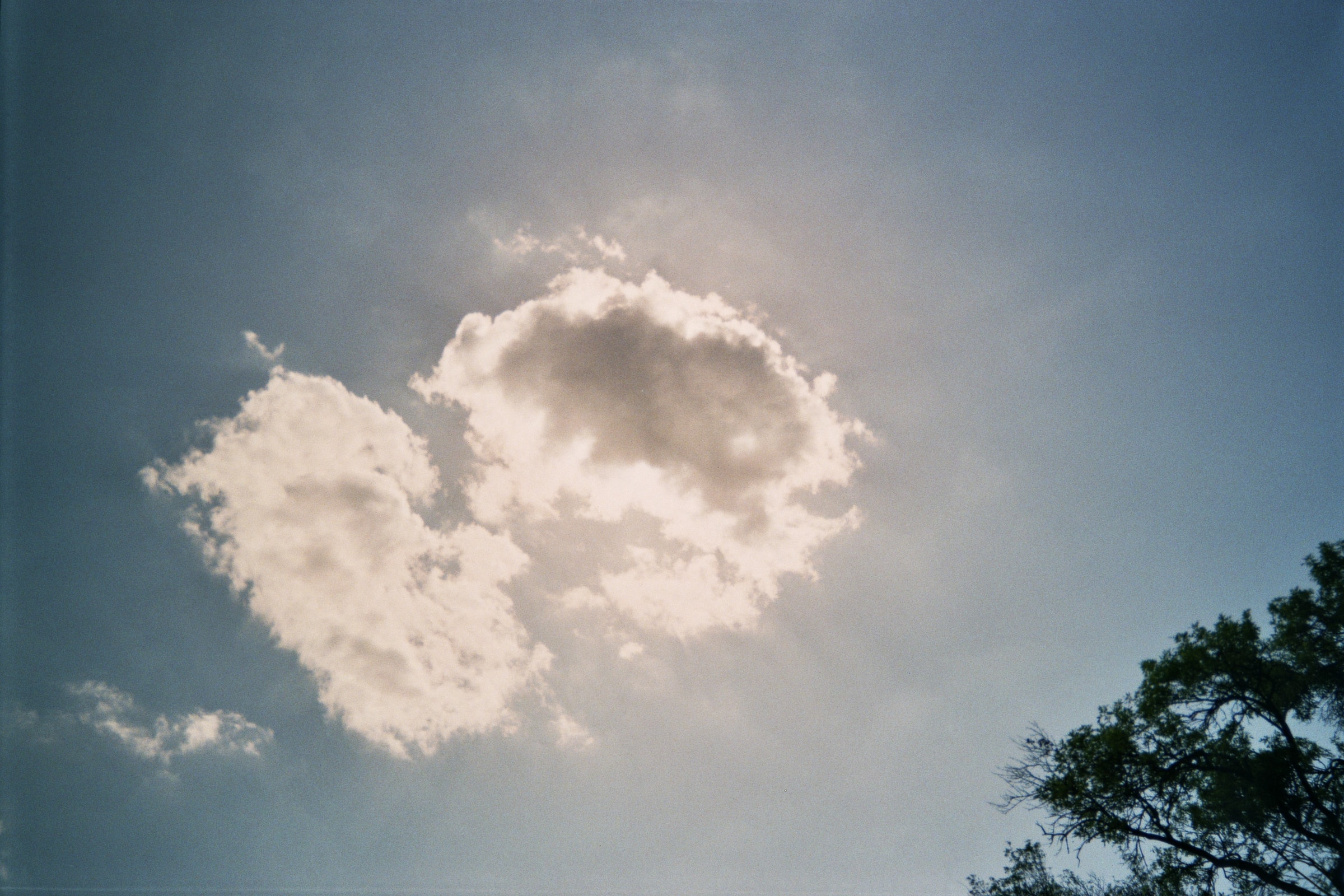 I was on the bus one day, on my way to work. I was just starting out at a popular coffee shop, and I had my uniform on and my apron all balled up in my purse. When I got on the bus, I knew I felt weird; I could tell by the way I twisted my hand into the little hand-loops, in a sort of death-grip, and the way my eyes darted around like a pin-ball machine. It was so crowded there was nowhere to rest your eyes—look to the left—no, person there, avoid person—to the right, no, another person, he’s staring right at you—look up, no, it looks like you think you’re better than everyone, that you’re praying to God to deliver you from this hell of public transportation. Then there was a man to my left, sitting in a seat, who had something in a tupperware. The smell somersaulted into my nostrils, and I looked over to see him peeling the lid back, fork in hand. I don’t know what it is about busses that ruins food, but no matter what it is, it’s always the worst thing you’ve ever smelled in your goddamn life. As I fought back waves of nausea, the Drake track I could hear blaring from someone’s headphones took on a sick angle, warped and mocking. My breath was begging in my chest, wanting to rise and fall like all the other breaths, but I kept still, like forcing the lid closed on a bursting suitcase, breathing only subtle ghosts in the shallow of my throat.

When people describe these situations, they always say the walls were closing in on them. That’s not how it happens. I can assure you there are no walls. Actually, you may find yourself wishing that there were; it’s more like all the walls are falling down around you, and you’re standing naked in the sunlight, amidst a vast sea of faces with sober eyes, all turned up at your crotch. Vulnerable. You want to shrink into yourself, but your body refuses to take up any less space, so you just stand there and tell yourself hateful things, like I want to throw up, I want to throw up, or, I fucking hate you. And you don’t even think to hate the faces. You just hate yourself.

After I’d clocked into work, Penny found me in the back, ducked behind a couple of crates, retching.

I didn’t have to ask her for help, or to bum a cigarette. But ten minutes later, we were sitting on crates that didn’t have vomit on them, with a glass of water in one hand and a lit cowboy-killer in the other. Penny never wasted time asking what was wrong. She was too good at this kind of thing to ask stupid questions. She’d told me to breathe a couple times, and then there was just silence, a comfortable silence, broken only by the soft crackling of the cigarette as we inhaled, staring out at the parking lot, watching the sun glint off of cars that rolled in for lunch. Occasionally, I’d say sorry. She’d respond with “It’s totally fine,” in the comforting, buoyant tone white girls seem to master.

She didn’t say it because it was fine, or even because she understood. She was wasting her lunch break, and had vomit on her shoes. As I said before, Penny is nice, nicer than most people.

But that didn’t mean she’d make it to the pistol scene.

Penny’d persevere, for a while. She’s an idealist. She’d make it through the bad sex, the silent dinners, and even the hateful vinegar. The mother-in-law could be tolerated, for the most part; Penelope’s lips would part, announcing a grand show of teeth as she’d pretend to ask advice about changing out her granite counter tops for rustic-looking tiles, avocado green. Just when her little girls were old enough to tie up their own pony-tails, and the boy, older, with dark eyes like his father, was tall enough to learn how to drive the tractor, just when everything they’d worked for began to fall into place—that’s when Penelope would fall. There’d be some soft-skinned man, the teacher of one of the girls’ art classes. She’d think about him in the evenings as she’d stir pasta, of his dewy eyes and pale lips, feeling the steam dampen her face like heavy breath, dreaming and watching the rigid linguine succumb to the heat. She’d do it of course, after much deliberation and several shades of wine coating her mouth one humid summer night. She’d be caught later, given away by a bite mark on her neck or a hushed conversation with me. But her man wouldn’t say anything, because, why ruin a bad thing?

She still wouldn’t have the balls to make it to the pistol scene, with the vineyard, the clouds or trembling O. She’d leave him before the kids graduated, before anyone thought to buy the gun.

Alexandra (Allie) is a Contributor, Editor and Content Coordinator for Placeholder Magazine. She grew up in both Stockton and Linden, California, and is currently attending UC Santa Cruz where she is working toward her Bachelor's in Creative Writing. Allie loves coffee, journaling, and the em-dash.