Originally from Stockton and now based in Oakland, Michael Gallagher is a passionate writer whose poetry is made up of both explosive, spontaneous wordplay and a cascade of verbal imagery that swirls and stimulates readers’ imaginations for hours. Moving through a fierce stream of concepts that build into larger ones and break into small ones, Gallagher’s work is fascinating to deconstruct and decipher, built off of his love of reading and books. Anyone interested can often find him selling a massive inventory of paperback books at a marketplace bazaar Lost and Found hosts every third Sunday of the month. To learn more, I was able to talk to Gallagher about the deeper context of his written works and projects. 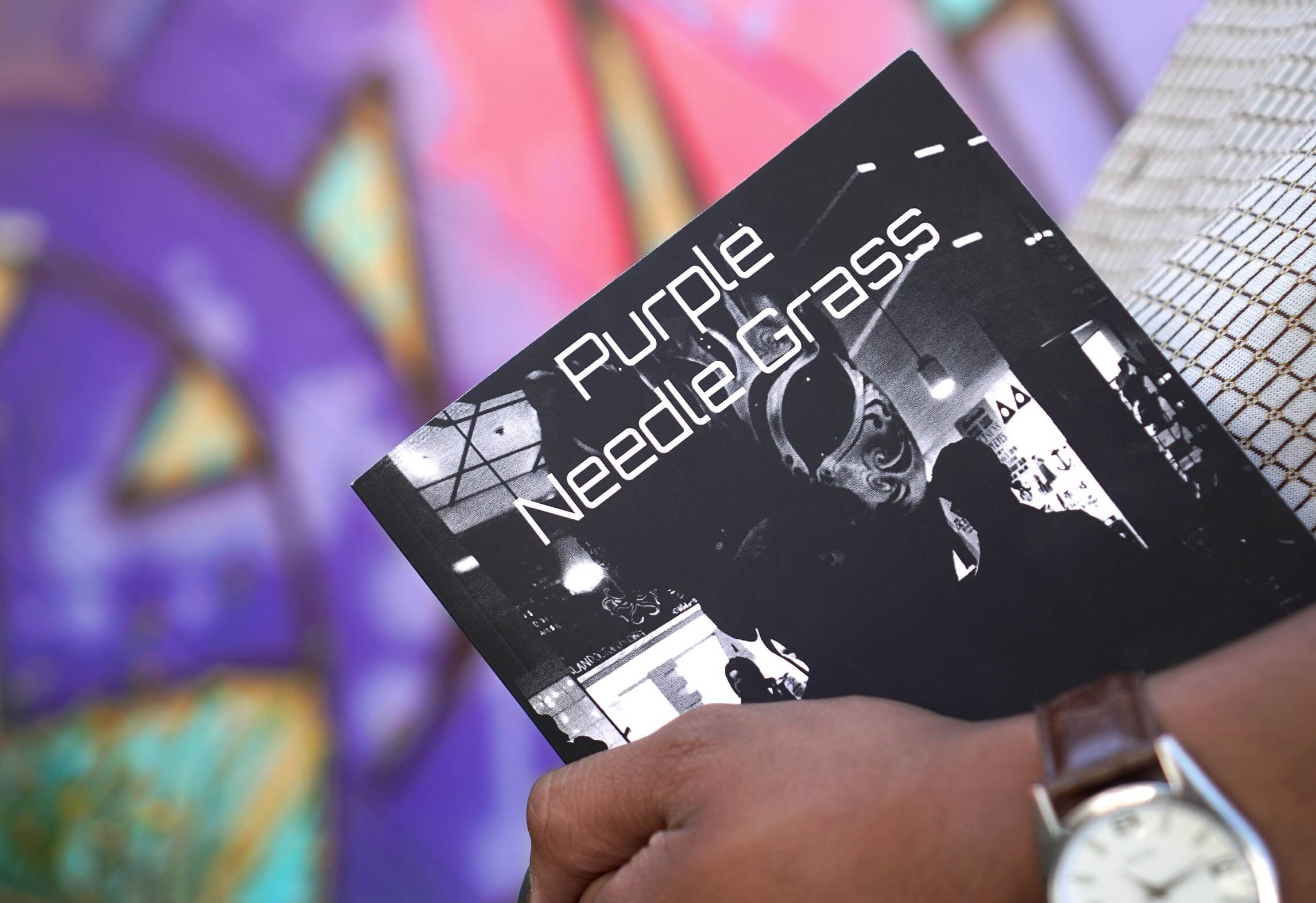 Ryan Camero: Tell us about Purple Needle Grass: What is this book about and what brought you to make it?

Michael Gallagher: The name, like on the back of the book, is derived from the name of a grass that used to cover all of the Central Valley: nassella pulchra. It has since mostly disappeared because of changes in natural cycles, but there is a little left. The concept represents a natural element that is dying, but is still kinda there. The idea that so much grass used to cover the area. The poems are about environment a lot of the time, but are filled with symbolic comparisons to personal experiences of my whole life. I definitely wanted to write something about nature, and also about politics, but in a surreal way… American gothic surrealism is the best way I would describe it. I wanted the book to be in a different side of the ordinary, and have more meaning than it usually does.

RC: Your poetry moves through heavy concepts and gritty, dark themes. What inspires you to write this kind of work?

MG: Definitely growing up in Stockton, for sure. Even Oakland in some aspects, the grittiness is here, too.. There’s a lot of things that people miss when they walk down the street, and in mundane situations.. I think that growing up in Stockton, and even the contemporary state of the world, there’s a lot of dark situations around us. For example, you’ll be on the train and someone on there might have just got out of prison. Things like that are around us all the time.

This work is really the opposite of glamorous, ‘cause a lot of it is addressing these negative issues… I wouldn’t see it as inherently negative, though. I think there’s good reason to show people things they don’t want to see sometimes, because then if we don’t show it, then we can’t solve it. The environmental element is important, too, because we are just watching the world around us get fucked over, and I wanted to speak about that. Some of it is like a bad trip, but I wouldn’t say it’s terrifying work. For aesthetic reasons, I wanted to share these perspectives that aren’t really seen or thought of as beautiful. There’s a lot of layered concepts in my work that may not initially be seen, but I love being able to stack multiple meanings in my poetry. I don’t really have a clear structure of when I make poems. I start off with feelings and streams of consciousness and let them form; once they’ve been written, I trim them to make them coherent.

RC: How did you get into writing poetry?

MG: Fosho.. I first started writing when I wrote lyrics to a song in the first band I was in, Udder Nonsense. I remember I wrote it and looked up hella words to make it, and people were like, “This was actually really good!” As a kid, I remember being known as a really good reader and writer, and I would write a ton of short stories in my elementary school class. They would give us prompts, and I would write hella crazy stories. The spoken word scene in Stockton really got me going by being involved with the With Our Words collective. They helped me take myself seriously as a writer. With the spoken word scene, it wasn’t that it was guaranteed to make you a better writer, but it put writing in front of you every day. You would go to these events and leave super inspired by what someone else recited that night. Later, when I went to California College for the Arts (CCA) for writing and literature, I was able to read a ton of different genres of work, and it broadened my understanding of what was possible in literature. I studied under master writers at that school, like Ishmael Reed, and it was really inspiring. 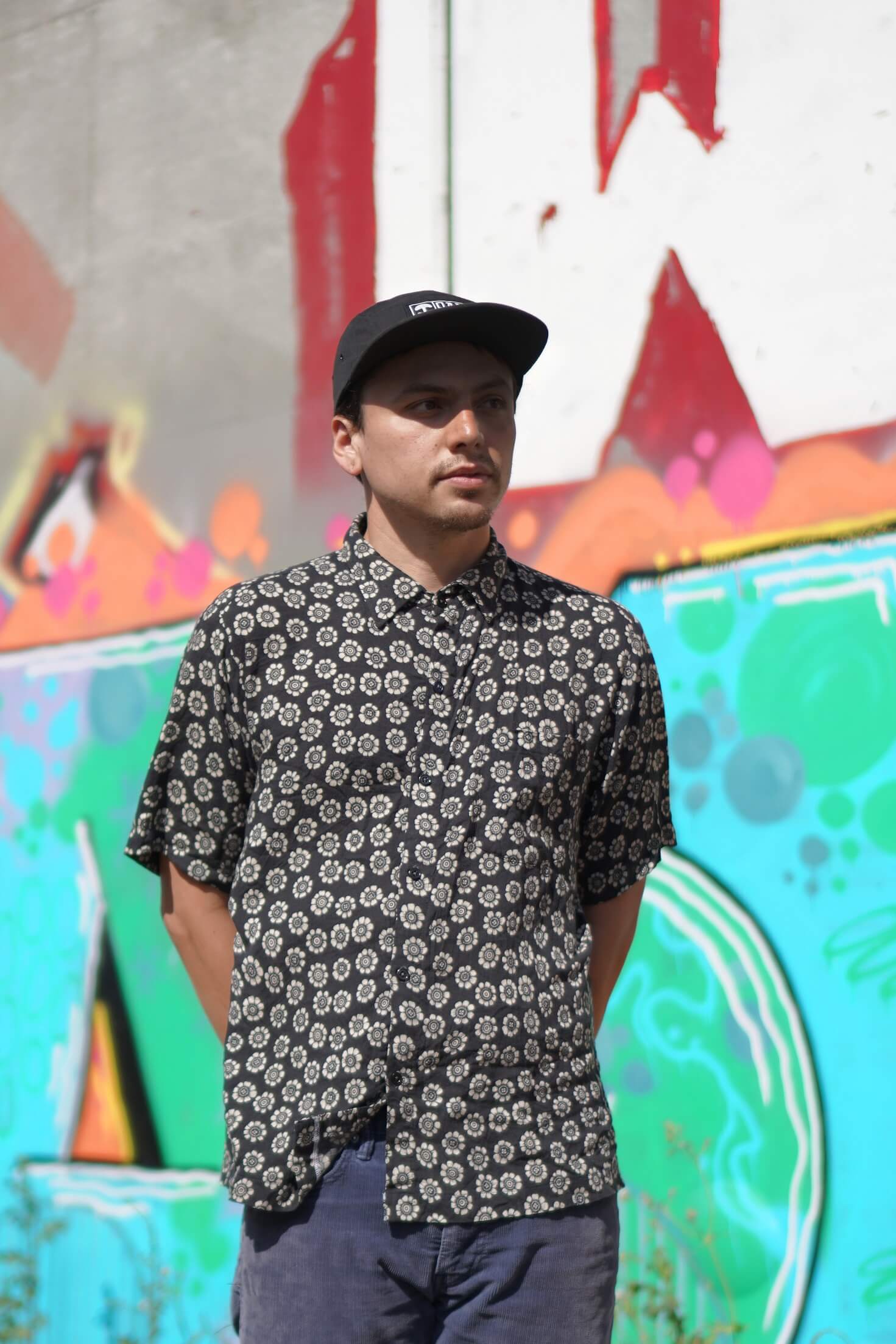 RC: There are a lot of references and connections made in your work from the Central Valley to the Bay Area. Tell us about what this relationship means to you.

MG: Because I grew up in the Central Valley and moved to Oakland, I often move between the two places. Kinda symbolically as a stream, I’ve been moving back and forth and have been trying to build communications and connections with them. I feel like these places are similar and are part of a larger region, like parts of a brain. Our tributaries are kinda like that. I write a lot about Stockton and Oakland and places between the two. One of my poems, “Abandoned Ships,” was inspired by the Carquinez bridge and San Pablo Bay, which have these sunken ships, and some of them are half-submerged. These are places that no one sees and are kinda bleak-looking. I feel like my poems kinda come in with the tide– when it comes in is when I write it all down.

RC: What are some of your influences as an artist?

MG: Like I said, Ishmael Reed is really good. Roberto Bolano, he’s a Chilean poet that writes surreal poetry but a lot of it is rooted in real life experiences and local folklore. There’s this Spanish poet, Federico Garcia Lorca, who is really good, too. Surrealists like Leonora Carrington and Tristan Tzara. Emily Dickinson does hella stuff about nature, and it’s hella symbolic and whatnot. There’s a lot of poems of hers about the moon and certain trees and flowers. I’m also influenced by classical and jazz music, graffiti and skating; these are some of the core things that I translate into my writing. Also, hip-hop! I’m a huge Aesop Rock fan and his wordplay is like candy for writers…So many words.

RC: What do you hope readers take away out of reading your work in Purple Needle Grass?

MG: I hope that they just listen closer to everyday life, maybe, and find deeper meanings in the ordinary than just surface-level experiences. I hope that they take more notice of the environment around them, the uncontrollable forces of nature… ‘cause it’s not only just the environmental nature, but human nature, too. Lastly, I hope that people read more poetry, or more books in general. I think that poetry is an important art form in society, because it has a lot to do with reflection, whether it’s reflecting about things around you or inside you. That’s important for anyone, regardless of who they are. In still water, you can literally see your reflection.

Ryan Camero is an arts activist and community organizer who believes wholeheartedly in the transformative powers of visual storytelling, cross-cultural understanding, and inter-generational communication in achieving social justice. As a coalition-builder across many groups, Ryan works primarily with Restore the Delta, the statewide California Student Sustainability Coalition, Placeholder Magazine and the internationally known Beehive Design Collective. He currently is based out of Stockton doing work on the statewide and national level and was awarded the national Brower Youth Award in 2015.