This post is the fourth installment of an on-going, inter-organizational series of reflections by activist Ryan Camero. See parts 1, 2, and 3 here.

POST-PARIS – I’m of the opinion that it is through our pleasures that we build the ability to live through our pain. One of my favorite and healing pastimes is singing, which I largely owe to growing up with a karaoke machine and a goofy, loving family that pulled it out every holiday.

There’s some type of power that’s held in music and voice. Through both we can feel someone’s message, as if their essence and emotions become interwoven deeply in a song or a speech.

For the past few years I’ve been performing an intersensory song scroll as a way to share solidarity across stories of the climate crisis. Made by New York-based fellow arts activist and friend Rachel Schragis, “It’s the Same Thing” is a strip of canvas spanning more than 90 feet-long. Portrayed on its cloth are paintings of droughts and oil spills, fracking rigs, mass mobilizations, corporate strip malls, and pipelines.

We must have sang and passed around this piece (peace) of mind several times over during COP21, in many moments and with different groups of people. I began to notice that as we harmonized every time, I could pinpoint and pick out all the types of voices that joined in.

Some were rosy and light. Others were deep and hardened. Voices whispered in melody, while some belted out their feelings in full force. At times, I found myself amazed at the layered harmonies that gave way to a song so beautiful (unable to exist without its collective pieces) and it sent tingles up my spine. But while these voices were so unbelievably different, every single one met in this shared song– in a way that built an understanding not even words could express.

There’s a scene in the Mesoamérica Resiste! graphic of the Beehive Design Collective, one of the groups I work with, that looks like this: 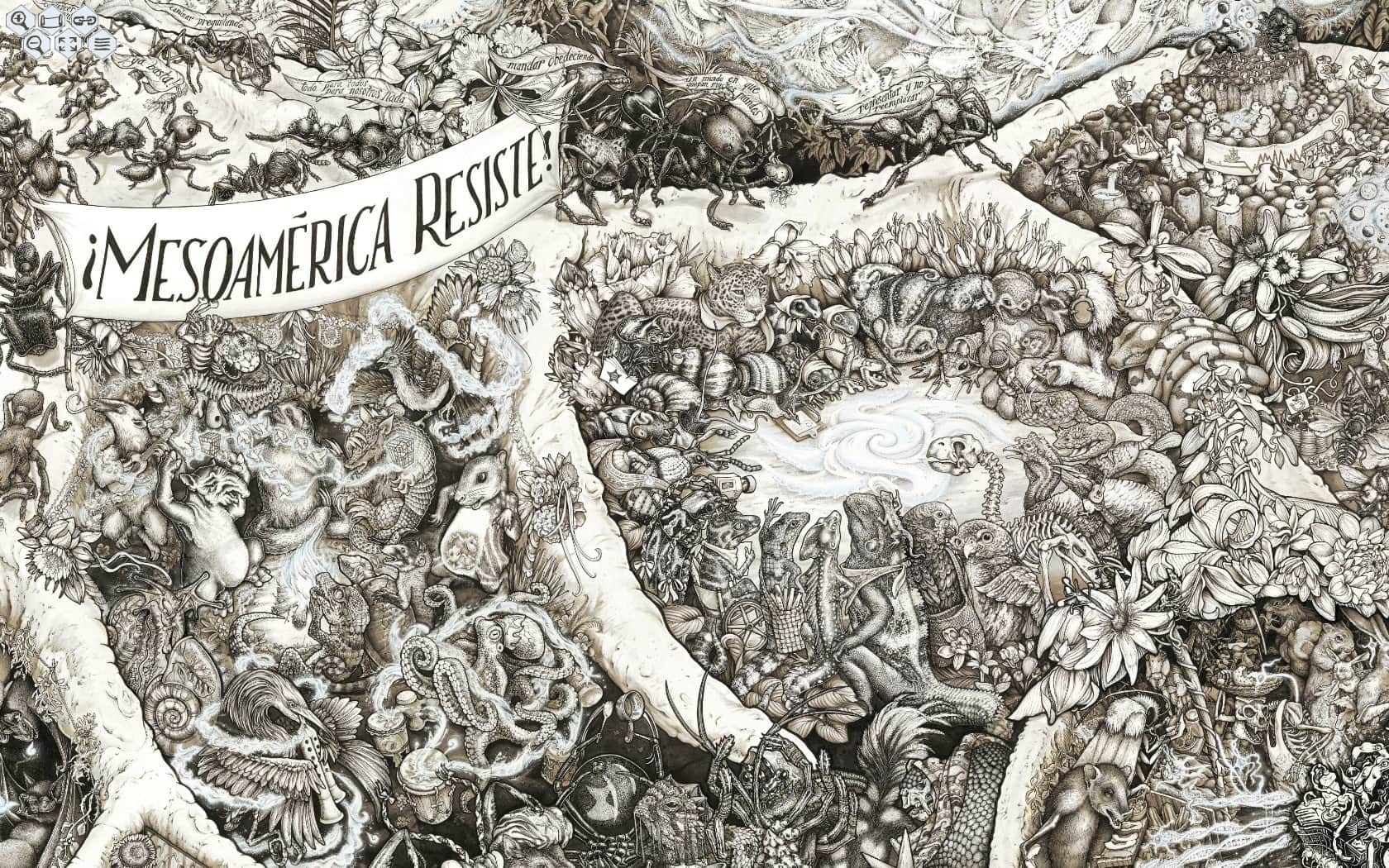 Click on the above image for an interactive map

The spiral in the center is the swirling of many volutas, an ancient Mayan glyph. When a voluta swirls upward, it means you are speaking; downward means you are listening. In this spiral, species from fauna to flora, predator to prey, insect to mammal, all gather to share their own stories—their volutas—of struggle. In sharing their own stories and hearing that of others, they find healing and build solutions together.

This is what our society needs.

I wrote some parting words for the Stockton Aesthetic Initiative, a community arts project that I started and finished in 2013. While my heart wrote it thinking locally, I think the message rings true in every instance, even now:

“I don’t believe art or music alone can solve problems. Especially those that are in Stockton.

But I do believe in the power of creativity as meditation. As a form of navigating conflicts, internal or external. As a way to give yourself a voice and reaction to the changing landscape of the world around us.”

Our own voices can be the guiding force, but they are only catalysts. The real work lies in what our movements do in unison to give shape to the world our songs want to sing about. It takes listening, hearing and harmonizing together to empower a people’s voice – and to go a step further, it takes using that voice in action against the forces of extraction and exploitation to stop such forces.

And like komorebi (Japanese for fragments of sunlight that make their way through tree leaves), I saw glimpses of that sunlight, and that world, made real. We just need to speak up for it.